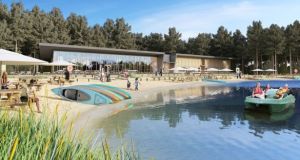 An artist’s impression of the planned lake at Centre Parcs Longford Forest in Ballymahon. The holiday village is expected to open next year.

The developers of the planned Center Parcs holiday village in Co Longford have announced the awarding of €1 million in supplier contracts to several Irish firms.

Coffee chain Java Republic has been awarded a six-figure contract to supply the forest resort’s cafes and bars, while Meath-based Briody Bedding will supply beds and mattresses for the 466 lodges and 30 apartments planned for the site.

Construction work at Centre Parcs Longford Forest in Ballymahon, which is expected to cost €233 million, is already well advanced with the resort expected to open next year.

UK-based Center Parcs, which is owned by Canadian investment company Brookfield Asset Management, is expecting about 2,500 guests a year when the site is fully operational.

The contract for the construction of the State’s first forest resort was awarded to John Sisk & Son last year.

“We are thrilled to announce additional suppliers from across Ireland to Center Parcs Longford Forest ahead of our opening in summer 2019,” Martin Dalby, chief executive of Center Parcs, said.

“On day one of the project we outlined our commitment to working with Irish suppliers across all aspects of the development. From working with Sisk and Roadbridge during construction, it is fantastic to continue this support for independent Irish businesses as we move into signing up suppliers in preparation for our village becoming operational next year,” he said.

The operators have also announced a contract with local transport group O’Haire Bus Hire to transport the resort’s housekeeping staff to and from the site when it becomes operational.

“We look forward to working with each supplier to ensure we deliver the ultimate Center Parcs experience to our 2,500 guests.”