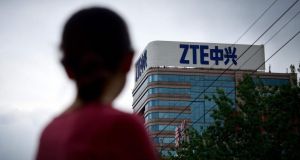 ZTE: the Chinese firm has been trying to resolve the blockade the US imposed in April as punishment for violating a 2017 sanctions settlement, then lying about it. Photograph: Wang Zhao/AFP/Getty

Donald Trump has told his commerce department to get ZTE, the enormous Chinese telecom-equipment maker, back into business after it denied the company export privileges.

The US president said in a Sunday-morning tweet, posted minutes after arriving at his golf course in Virginia, that he and his Chinese counterpart, Xi Jinping, are working together to give ZTE “a way to get back into business, fast”. He said the “Commerce Department has been instructed to get it done!” because “too many jobs in China lost”.

A US blockade has choked off the revenue of the second-largest Chinese telecom company, which regards the next two weeks as crucial as it faces potential collapse. The firm said last Thursday that it had suspended all major operations.

One of the companies affected by that decision is Denis O’Brien’s telecom group Digicel, which last year hired the Chinese group to upgrade its networks. Digicel, which operates in 32 markets across the Caribbean and Asia Pacific regions, said last week that the suspension of ZTE operations would have only a limited impact on its business, as much of the planned ZTE-related network upgrade roll-out was already complete.

ZTE has been trying to resolve the blockade that Trump’s commerce department imposed in April as punishment for violating the terms of a 2017 sanctions settlement, then lying about it. The department banned shipments of US technology to ZTE for seven years, saying the company had failed to reprimand employees who violated US trade controls on Iran and North Korea.

That cut off access to the US technology it needs to build most of its products, from Qualcomm’s semiconductors to optical chips from Lumentum Holdings.

In an April 16th statement the US commerce secretary, Wilbur Ross, said ZTE made false statements to the US government and “covered up the fact” that the company paid full bonuses to employees that had engaged in illegal conduct. “This egregious behaviour cannot be ignored,” Mr Ross said.

The company also has been working on new, faster fifth-generation wireless technology, along with its local rival Huawei. That is a key technology battle between the US and China – and one that China has a chance to win. – Bloomberg