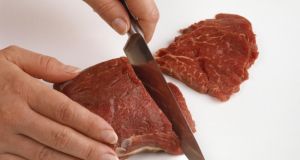 A burgeoning middle class in China has led to increased demand for beef.

Ireland’s strong trading relationship with China is going to grow at an accelerated rate, particularly since the end to a ban on beef, according to Minister for Agriculture Michael Creed.

Mr Creed is leading a large delegation of Irish food companies to China this week ahead of Irish beef hitting the shelves of Chinese supermarkets this summer.

During the visit to Beijing, Shanghai, Hangzhou and Hong Kong, the Minister will sign a number of deals based around the Chinese government decision to allow Irish beef into China.

“The value of Irish agrifood exports to China continues to grow and this is welcome. But the partnership between Ireland and China goes far beyond a transactional trading arrangement,” Mr Creed told The Irish Times.

Dairy exports reached €667 million in 2017 and pig meat exports have increased from €37 million to €100.3 million in the last five years. China is also a growing market for seafood and other food and drink exports.

A burgeoning middle class means increased demand for beef, and domestically produced meat is expensive. That means the market for overseas beef is expanding.

China is currently Ireland’s second-biggest market for dairy and pork.

Britain currently makes up half of Irish beef imports, so a looming Brexit makes China look even more attractive.

Ireland has had three tortuous years since China formally lifted a ban on Irish beef exports to China imposed after the BSE crisis. Inspectors from the China state administration of quality supervision, inspection and quarantine have made regular trips to visit beef plants in Ireland.

Ireland has some catching up to do. As it stands, Brazil and Australia are the dominant exporters of beef into China, with 30 per cent and 19 per cent market share, respectively, in 2016.

A similar-sized competitor is New Zealand. With a population of 4.7 million, New Zealand is more closely comparable to Ireland. China is New Zealand’s largest export destination and it has made amazing strides in the market.

This week’s visit coincides with a delegation of more than 70 European companies from the European agrifood sector led by Phil Hogan, European commissioner for agriculture and rural development, who is in China to promote “safe and quality food and beverages” from Europe.

Both the Irish and the European Union delegation will be going to SIAL China, Asia’s largest food innovation exhibition, which usually attracts more than 100,000 visitors. The EU is “region of honour” this year, and will have a large pavilion at the fair showcasing the qualities of European agrifood products.

1 Retailers accused of ‘stealing business’ from rivals by flouting restrictions
2 Outgoing Irish a sitting duck for Covid
3 How long can Government afford to keep State pension age at 66?
4 In praise of Gogglebox Ireland, an essential service in all but name
5 Intercom CEO Karen Peacock: ‘I do miss seeing people live’
6 Paul Coulson’s big bet on cans leaves Ardagh disciples waiting
7 ‘French people are pretty relaxed. They don’t pander to scaremongering or hysteria’
8 Nama grants Ronan four-month extension on €160m glass bottle site deal
9 Goldman Sachs in talks to take over Blanchardstown shopping centre
10 How can I view my dead brother’s will if I’m not the executor?
Real news has value SUBSCRIBE