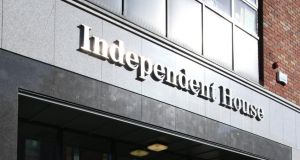 INM’s agm on Friday will mark the first public opportunity for the company’s new chairman, Murdoch MacLennan, to demonstrate his capabilities as an independent appointment to the board.

The seemingly never-ending bout between traditional retailers and websites to secure customers never seems to land a knockout blow. Online offers ease, the promise of cheaper prices and home delivery, while shops dangle a day out, actual (as opposed to virtual) browsing and human interaction.

Whichever way a customer ultimately goes on any given day, “bricks and mortar” businesses know they have to keep on their game – and this is likely to be a focus of the Retail Excellence 2018 Retreat (Tuesday and Wednesday).

It recognises a “rapidly” changing industry, even going so far as to tell its 1,800 members the online space has “become a bigger challenge to the high street than we ever envisaged. The consumer won’t come out from behind the laptop unless you have something experiential.”

This proposition is supported by evidence. Last year, in its retail and consumer report , PwC said stores must continually evolve and “remain relevant” by focusing on customer experience.

It is not the only subject up for discussion at this year’s Retreat but it is clearly an existential one.

Business leaders past and present from Victoria’s Secret, Applegreen, Leon restaurants, John Lewis, Dreams, Woodies and Harvey Norman among others will be on hand to dispense over-the-counter insight.

It will be a keenly anticipated agm at Independent News & Media (INM) on Friday, about nine months since former chief executive Robert Pitt refused to back a new term for former chairman Leslie Buckley.

Now, of course, both men are gone and much has happened in the intervening period. Friday’s proceedings will no doubt focus on demands from shareholders to explain the possible costs and financial exposure of the ongoing data breach scandal, whose bounds are difficult to imagine.

It will also mark the first public opportunity for the company’s new chairman, Murdoch MacLennan, to demonstrate his capabilities as an independent appointment to the board, and a steady hand in an increasingly choppy corporate environment.

The deputy chairman of the Telegraph Media group was among four new non-executive directors appointed to INM’s board in March.

The agm also falls about a month after one of the company’s 10 biggest shareholders urged it to examine using some of its €90 million cash pile to buy back Denis O’Brien’s 30 per cent stake.

The investment firm had wanted the company to draw a line under the legal issues and its impact on the stock price. It was also suggested INM could facilitate talks with a third party that might want to buy his stake.

There are no indications that Mr O’Brien, whose stock is worth about €33 million after investing €500 million, would be a willing seller.