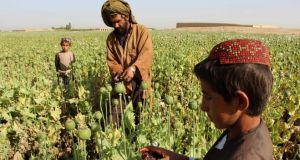 Afghan farmers harvest opium sap in Helmand province. The UN estimates that up to 85 per cent of Afghanistan’s poppy cultivation is under Taliban control. Photograph: Noor Mohammad/AFP/Getty Images

It was in this month nearly 50 years ago that US president Richard Nixon launched the “war on drugs”. Some wars have lasted longer but not many have continued after such an obvious defeat. Tenacity and stubbornness are prized values in any battle but few generals would continue fighting at such cost.

The war on drugs was lost the moment it started but it continues relentlessly, morphing into a narrative favoured by dystopian novelists.

One of the growth areas of academic finance in recent years has resulted in psychologists winning Nobel prizes for economics. The ways in which we are different to the rational, utility-maximising caricature of the textbooks has been usefully explored by researchers and has yielded a stream of insights that have guided policymakers in many jurisdictions.

Researchers are fond of finding weird anomalies in human behaviour that conflict with standard predictions, coming up with theories about why we behave in this way and then suggesting policy “nudges” that lead to better outcomes for both individuals and societies.

There is, perhaps, nothing weirder than the war on drugs: it will provide material for the study of anomalous human behaviour for generations to come.

Anyone who spends a few minutes looking at the facts, the data, cannot but be convinced that the war is an exercise in futility. Countless studies, learned articles and op-ed pieces all point to the same conclusion: the war is pointless and should stop, and different methods should be tried. And yet all that happens is that governments typically devote even more money to the war, always with the same result: more deaths, disease and criminals.

Each year, drug use rises. The range and availability of drugs rise. Terrorists rely on valuable income from drugs. The United Nations estimates that up to 85 per cent of Afghanistan’s poppy cultivation is under the control of the Taliban, with half of its income coming from heroin – and most of the world’s supply of that drug is from those fields. Even waging actual war doesn’t work.

The statistics go on and on. Drug money accounts for up to a third of cross-border organised crime. Money laundering is often drug related: 60-70 per cent of narcotic cash has to be laundered. The UN thinks that as many as 230,000 people a year die from drug-related causes. There are an estimated 183 million cannabis users worldwide. The equivalent of 427,000 football pitches are under cultivation for opiates – and 219,000 pitches worth of cocaine cultivation. Eighty tons of heroin were seized in the last year for which we have data, but that doesn’t seem to have caused many supply problems.

Ever heard of NPSs? They are the “new psychoactive substances” whose use is proliferating at an alarming rate. The UN reports 483 of these were discovered in the last year. These don’t include the “crystal meth” type drugs made famous by the television drama Breaking Bad – 132 tons of that were seized globally in 2015 along with 23 tons of the newer stuff few of us have even heard of.

Prisons are full of drug criminals, often of the petty variety. Jails consume drugs at nearly four times the rate of the wider population: if you were not a drug user before going to jail the chances are high that you will be by the time you get out.

Most – if not all – people who look at all of this conclude that drugs should be legalised, regulated and taxed. The medical profession in the UK, via the industry publication the British Medical Journal, this week made a strong call for the war to end. The medics reckon that fighting drug use costs every British taxpayer £400 (€456) a year. I reckon that is a very conservative estimate.

They also calculate that the global trade in drugs is worth £236 billion (€269 billion) per annum.

In the UK, the Royal College of Physicians, the Faculty of Public Health and the Royal Society for Public Health have joined the calls for decriminalisation. All these bodies are keen to stress that they do not condone drug taking but have just looked at the facts and concluded that the current legal framework is not fit for purpose. It simply doesn’t work: drug use is not deterred. Drug users need education and treatment, not legal sanction.

The evidence is overwhelming. And drug revenues would be put to much better use in the hands of government rather than gangs. Yet few politicians are willing to even discuss all this, let alone suggest a new approach. But change is coming. One or two countries are experimenting. Even in the US, cannabis has been legalised in certain states.

We know that our taxes have to rise sooner or later to fund better healthcare. We might usefully employ psychologists and behavioural economists to try and understand why we can’t face the facts about the failed war on drugs. In the spirit of making constructive suggestions, how about asking people whether they would prefer property taxes to go up or cannabis to be legalised and taxed?