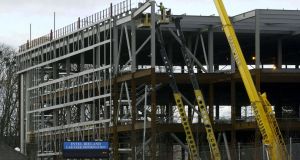 Activity in the commercial construction sector rose at its fastest level in 11 months in April. Photograph: Alan Betson

The sector is benefiting from a pick-up in housebuilding in urban areas, including Dublin, where demand for homes outstrips supply, and an increase in commercial building, which recovered more quickly than the residential sector.

Ulster Bank’s latest monthly report notes, however, that the uptick in demand is feeding through to increased pressure on supply chains and a marked increase in input prices.

Its seasonally adjusted index rose from 57.5 in March to 60.7 in April, significantly above the 50 mark that separates expansion from contraction.

The latest reading signalling a sharp expansion in Irish construction was the second fastest since May 2017. The overall upturn, the bank’s report said, was driven by an increase in new projects following poor weather in the first few months of the year.

Total activity growth in construction was supported by sharper rises in housing and commercial activity, each of which reported marked increases that were the fastest in 11 months.

In contrast, growth in civil engineering activity, the third key area surveyed by the report, softened and was the weakest of the three monitored subsectors.

Business confidence towards output over the coming 12 months while remaining robust dipped to a three-month low, however.

“Following a weather-related slowdown in March, the headline PMI picked back up to a very elevated reading of 60.7 in April, in the process reaching a three-month high,” Ulster Bank chief economist Simon Barry noted.

“There was a very sharp acceleration in commercial activity which took the commercial PMI to its highest level since last May, in the process leaving commercial as the strongest-performing activity category last month,” he said.

“But the improvement was broadly based, with the pace of growth in housing activity also picking up to an 11-month high, while civil engineering recorded a fifth consecutive month of expansion, albeit at a somewhat slower pace in April,” Mr Barry added.