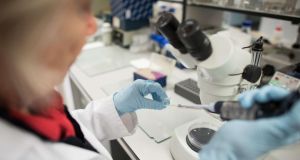 Niall FitzGerald believes Ireland has a once-in-a-lifetime opportunity. The British-based former head of Unilever has a distinct perspective on Brexit, that of a phenomenally well-connected insider who retains enough Irish and international links to inform a considered outsider’s view.

He believes Ireland is uniquely placed to become a globally significant centre for academia and research. But he is emphatic that this ambition should be pursued not on the basis of self-interest but in the closest possible co-operation with the UK, building on already strong relationships. If structured correctly, “developing collaborative muscle” will boost economic activity in Ireland and greatly enhance international competitiveness, he predicts.

The representative groups for Irish and British universities met last week for the first time to examine new areas for collaboration and new ways of doing things. Working with the British Irish Chamber of Commerce, FitzGerald also got researchers, funders, university heads, politicians and policymakers into the one room. Part of the mission, he says, is getting “to understand this issue is now, it’s urgent”.

The impact of the underinvestment shock in third-level education since 2008 has to be addressed, FitzGerald says

There are lot of interesting things that can be done, and much agreement, but “the trick is to get action and things to come out of it”. He outlined the scale of the opportunity when he met Taoiseach Leo Varadkar recently.

Being English speaking and in the EU, he says, gives Ireland its once-in-a-lifetime opportunity – and it’s not just because of Brexit. “It’s because of the feeling the UK is not as welcoming of talent as it was, and the US is not as welcoming of talent. Ireland is very welcoming. But it’s one thing to be welcoming. You then have to have the infrastructure to accommodate it,” FitzGerald says.

The impact of the underinvestment “shock” in third-level education since 2008 has to be addressed, he says. “We all understand the reasons, but we have got to recognise [that] the opportunity that’s there and in very plain sight requires investment now.”

About 40 per cent of university infrastructure needs to be repaired or replaced. The National Development Plan commits to invest 2.5 per cent of gross national product in higher education and research by 2020; the current level is 1.2 per cent. “Unless you starting taking action on that immediately, you haven’t a hope of reaching it,” FitzGerald says.

Infrastructure has to be modern, with facilities that world-class researchers need, and pay issues must be resolved so they can be given the appropriate reward, he adds. “Not everybody wants to work just for money, but they don’t want to be so disadvantaged that it becomes a real inhibitor to even considering the issue.”

On Varadkar’s response, he says, “I don’t think he disagreed, in principle at least.” FitzGerald accepts there are competing priorities, but “this is different in that the opportunity is now”.

FitzGerald may see opportunities for Ireland, but he is also convinced that maintaining the UK as a central element in the European research framework is vital. “We need to be a positive advocate of that, not seeking to make some short-term benefits if the UK is out. If the UK is outside we’ll all suffer.”

There are bread-and-butter issues that can be acted on, such as ensuring students from Ireland are regarded as “home students” and not charged international fees. This should apply equally with UK students coming to Ireland.

A UK-Ireland bilateral research fund as well as a north-south research centre would be “very tangible ways” of increasing collaboration while funding 50:50 research projects with international participants.

Joint professorships and PhD programmes between both jurisdictions should be embedded as a natural part of the infrastructure, replacing “project by project” arrangements.

We still have got no clarity on the fate of three million EU citizens in the UK. Everybody keeps saying it will be all right. But it isn’t all right

Greater flexibility within the third-level employment control framework will be needed to attract leading academics, FitzGerald says. Exceptions have been made for some outstanding researchers, but routine interchangeability between locations is needed, and mutual recognition of professional qualifications to avoid frictions coming into the system, he suggests.

As chairman of the Leverhulme Trust, which funds more than €100 million of research projects each year, he has noticed a trend among “lead investigators” in the UK but with a “very multinational” team based in UK and elsewhere. Increasingly, they are expressing concern about getting people to commit to research projects; they want to wait to see if they would be welcome.

“We still have got no clarity on the fate of three million EU citizens in this country,” he says, referring to the UK. “Everybody keep saying it will be all right. But it isn’t all right.”

Moving outside education, he believes that, although there is a certain degree of inevitability about Brexit, a significant body of people in the House of Lords and elsewhere are working hard to reverse it.

But talk of a second referendum should be avoided, because that’s too emotional, he says.

This is against the backdrop of “extreme Brexiteers” recasting red lines on EU payments, a transition agreement and a customs union. “They are fighting desperately to maintain what I call the fig leaf of Brexit, even though in substance it’s nothing like the Brexit they had in mind. Because they’re afraid they will lose the whole thing. I think there’s still a chance that when people look at that coldly they will say: ‘Wait at minute. What is all this about? What have we actually got that is beneficial?’ ”

The result won’t be seen in one big headline that you can see and try to resolve, he says. It will happen incrementally over the next 10 to 20 years. “Then you [will] look back 10 or 15 years later and you [will] say, ‘When did this happen? When did we become so isolated? We never intended it.’ ”