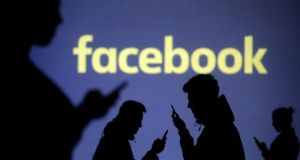 Facebook: Mark Zuckerberg “is still only a kid”, says Alan Rusbridger. “How could he possibly understand what it is that he’s launched?” Photograph: Dado Ruvic/Reuters

Governments should avoid heavy-handed regulation of Facebook, Google and other social-media giants as a response to recent scandals about how their platforms have been used to interfere in political campaigns, a former editor of the British newspaper the Guardian has said.

Governments should instead encourage the companies to become more open and transparent, Alan Rusbridger told The Irish Times. “A lot of this is down to timing,” he said. “You keep having to pinch yourself and say [Mark] Zuckerberg” – the Facebook founder – “is still only a kid. My sense of watching him in front of [the US] Congress recently was of somebody who had started something so enormous, and how could he possibly understand what it is that he’s launched. The truth is dawning, as it is at Google and Twitter.

“You can charge in with hobnail boots and say regulate them and stop them, or you give them a bit of time and ask them to be open and transparent about what they’re doing. That feels to me like the sensible reaction.”

His comments come in the wake of recent scandals involving Cambridge Analytica, which worked with the election team of the US president, Donald Trump, and the winning Brexit campaign, in the UK, to harvest millions of Facebook profiles to influence voting.

In Ireland, Facebook and Google last week banned advertising related to the Eighth Amendment amid concerns about the integrity of the debate in the run-up to this month’s referendum on the liberalisation of abortion law.

In January Germany introduced a law requiring social-media companies to quickly remove hate speech from their sites or face fines of up to €50 million. Facebook is “so enormous”, Mr Rusbridger said, that it could probably afford to hire thousands of moderators to comply with the law.

“Whether they can afford to do it in 200 countries I don’t know. If you said to Twitter that you had to do that as well . . . Twitter is not making any money, and that could finish off Twitter,” he said. “You have to give them a bit of time, hold their hand and try to persuade them to come out into the open a bit more.”

Mr Rusbridger is extremely positive about the impact of social media on society generally. “There are some fantastic people talking knowledgeably about their field, doing it with evidence, allowing response. What’s not to like? But we also know it’s hate-filled and exploitative and so on. I wish people would just stop saying that social media is crap. It seems to me an incredibly new, interesting, dangerous, exhilarating thing. But why would you want to charge in and close it down before it’s even had the chance to show what they do?”

He uses Facebook, to connect with friends, and Twitter, “if I ever feel moved to say something in public”. And, “I love Instagram. That’s just nice.”

Mr Rusbridger was editor of the Guardian for 20 years, between 1995 and 2015, and launched online versions in the United States and Australia; the newspaper today attracts more than 100 million unique browsers a month.

He believes significant upheaval will continue in the newspaper industry over the next decade. “I can’t believe there will be many daily newspapers in 10 years’ time,” he said. “I would have thought that many newspapers would produce a weekly edition, and the weekend papers would be probably be more long-lasting. You just have to be ready for digital, because at some point you will turn off the printing presses. The position of the general newspaper is a really tricky one.”

Mr Rusbridger, who is now principal of Lady Margaret Hall, at Oxford University, has written a book, called Breaking News, about the remaking of journalism and why it matters. He believes many in the industry have yet to fully grasp the threat posed by social media and digital publishing. “I wonder if journalists, even now, have woken up to the more radical nature of the transformation,” he said. “What can I do that social media isn’t doing? It’s too easy for journalists to sit there and lob rotten tomatoes at Facebook and social media.”

Mr Rusbridger was speaking in Dublin ahead of his address to the annual dinner of the Oxford and Cambridge Society of Ireland on Saturday night.

Breaking News is due to be published by Canongate in September