Want to be a good boss? Then don’t ‘manswer’

A 10-year-old knows if someone asks you a question, it is polite to respond to them 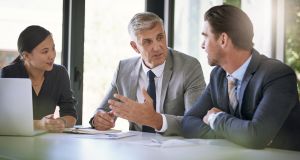 ‘Manswering’ is where a man answers another man, even though a woman is asking the question. Photograph: iStock

I caught up with a friend the other day who was in a serious funk.

She had just persuaded a company to hire her firm for a big job, and an executive from the business had come to her office to meet the rest of her team and her chief executive.

As the meeting got under way, she noticed a pattern emerging. Each time she spoke to the new client he replied to her boss, another man. Even when she asked him a direct question, he answered the boss instead of her.

“It was as if I’d vanished,” she said, “even though I was the only reason they were there”.

I have seen this sort of thing happen so many times I used to have a name for it: the manswer, because it always seemed to be a man answering another man when a woman had asked the question. Then I started working with a woman who did precisely the same thing.

It has become a cliche to say that people leave managers rather than companies, but there is something to it

Once, I made the mistake of sitting between her and a moderately important man at a lunch. After I asked her how a project she had been working on was faring, she launched into an elaborate answer to the bemused – and utterly mute – man. She went on for so long and with such gusto that I was soon pressed hard against the back of my chair, to the point that I began to think I could topple over backwards to the floor – a move I am sure she would have welcomed.

I still hear far more stories of manswering men than women, but a better name for the practice is simply this: bad manners. A 10-year-old knows that if someone asks you a question, it is polite to look them in the eye and respond, not prattle away to someone more important beside them.

It is one thing if this happens with friends at a party or a night out, but it is quite another if it happens in the office, especially if the offender is a manager. And yet it does.

In fact, in my experience, it is easy for rude, inattentive people with a low level of emotional intelligence to be plonked into top management jobs, either because they were deemed to deserve a promotion or were thought to be better at driving underlings to perform. Yet these are precisely the sorts of managers I have never wanted to work for and I’m sure I am not alone.

It has become a cliche to say that people leave managers rather than companies, but there is something to it. One in two employees in the US has quit their jobs to get away from their managers at some point in their careers, according to a report by the Gallup research outfit.

The same study also found something familiar, if faintly unsettling: female managers are better than men at a lot of important tasks. Apparently, women are more likely to dole out praise and encourage career development. They also tend to be more engaged with their jobs.

“The management implication is quite clear: US organisations should place more emphasis on hiring and promoting more female managers,” the report said.

The idea that women are naturally nurturing is as irksome as any other stereotype. I prefer to think, as the Gallup study suggests, that female managers simply try harder because they are still so outnumbered by men and feel a need to exceed expectations.

Either way, it seems obvious that polite, attentive and responsive managers are a plus, regardless of whether they wear a skirt or a tie.

I thought about this the other day when I went to a meeting with the chairman of a well-known British company and a group of other journalists, the most senior of whom were men. The chairman was blisteringly polite. He shook everyone’s hand on arrival, answered all questions directly (no manswering) and made a point of saying goodbye to each person when the meeting ended. I had never met him before and was pathetically impressed.

“When did you first meet him?” I asked another woman who had been there, who he seemed to know very well. “I’ve never met him before in my life,” she said, admitting she had been equally bowled over.

I have no idea what he is actually like to work for, but I do know one thing: any boss who genuinely knows how to operate like that is always going to be preferable to one who does not.

1 Ireland faces 'deep downturn' this year and may not rebound until 2024 if there is a second wave
2 Why are markets booming when a crash is on the way?
3 ‘The rental situation stops me moving back home’
4 Red tape logjam creates fear for Irish timber supply
5 John FitzGerald: Civil Service expertise key to Government policy
6 Ryanair pilots accept 20% pay cut, airline says
7 How much do Irish people earn? And what will Covid-19 do to our wages?
8 Dublin consultancy Pathfinder set for expansion after buyout by Sia Partners
9 Preliminary deal to allow Irish goods travel through UK reached - reports
10 Citi Europe head sees Irish economy among fastest to bounce back
Real news has value SUBSCRIBE