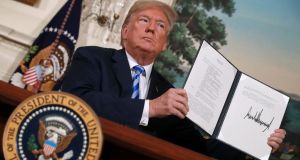 US president Donald Trump’s decision to pull out of the international nuclear deal with Iran and his threat to reimpose sanctions on firms doing business with the country have cast fresh doubt over Ireland’s trade with it. Photograph: Getty Images

More than €143 million worth of Irish exports to Iran are under threat from US president Donald Trump’s decision to pull out of the international nuclear deal and to reimpose sanctions on the Islamic state.

Several Irish firms began trading with Iran, the Middle East’s second-largest economy, in the wake of the 2015 deal to control Tehran’s nuclear ambitions, which led to the lifting of long-standing international sanctions and the resumption of formal trade ties with several European countries.

Bord Bia and Enterprise Ireland led separate trade missions to Tehran in 2016, which were attended by dozens of Irish companies, looking to open trade contacts between the two states.

Last year, Ireland exported €143.2 million worth of goods and services to Iran, more than double the level in the previous year. The bulk of the exports – €70 million – comprised office machines and data-processing equipment, but there were also significant exports of medical and pharmaceutical equipment, and dairy produce.

With 80 million people cut off from international trade for years, Iran is seen as one of the great untapped markets. The rapid growth in Irish exports in just two years since sanctions were lifted reflects the appetite for western products.

However, Washington’s decision to pull out of the international nuclear deal and its threat to reimpose sanctions on firms doing business in Iran has cast fresh doubt over this new trade.

The Government’s position, in common with its European Union partners, remains that the 2015 deal remains in operation and that former EU and United Nations sanctions on Iran, which had been suspended under the agreement, are not being reinstated.

“The effect on EU firms of any renewed, or extended, US sanctions will be a matter of concern to all EU partners, and will need to be followed and considered closely at that level,” Tánaiste and Minister for Foreign Affairs Simon Coveney said in the wake of the US announcement.

He also noted that the principal impediment for Irish firms growing their business with Iran has been the reluctance of Irish and European banks to engage in financial transactions with Iran, due to concerns about the impact of US financial controls on the state. These were not suspended under the 2015 agreement.

Iran expects to hear from Airbus in the coming days about the fate of an order for 100 aircraft that looks to have been wrecked by the US decision to reinstate sanctions on the Islamic republic. The deal, potentially worth about $18-20 billion at list prices, was agreed in December 2016. But so far only three aircraft have been delivered, with industry sources blaming delays on the wariness of banks to finance business with Tehran.

The US administration appeared to deal a fatal blow to the transaction.

1 Institutional investors spend €470m on residential properties in latest quarter
2 Monsoon landlords win challenge over creditors arrangement that cut rents
3 Fair deal? Family at odds with hospital and each other not so sure
4 What to consider if older person or loved one needs care at home
5 AIB settled Citigroup dispute over Rusnak at fraction of $872m claim
6 ‘I hate haggling because I hate when people do it to me’
7 Aldi to impose limits as Christmas toys go on sale
8 Sorry, Domhnall Gleeson, I don’t want to chat to you anymore
9 Roll up, roll up: capitalism will drive cannabis legalisation in Ireland
10 Irish house prices could buck European trend and fall this year, says S&P
Real news has value SUBSCRIBE