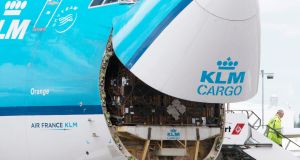 Heat from a consignment of flowers is believed to have activated a fire alarm on a cargo jet, forcing it to make an emergency landing at Shannon Airport. Photograph: Press 22

Heat from a consignment of flowers is believed to have activated a fire alarm on board a cargo jet carrying horses that made an emergency landing at Shannon Airport on Saturday.

A major multi-agency emergency plan, that included the Irish Coast Guard and RNLI, was put into action up to an hour before the jet entered Irish airspace.

Martinair flight MPH-7342 was travelling from Miami in the US to Amsterdam in Holland.

There was a crew of six on board including animal welfare specialists as the flight was carrying 52 horses. There was also a consignment of flowers as well as a vehicle on board.

The KLM Cargo Boeing 747-400 freighter, operating on behalf of Martinair, was two hours west of Ireland when the crew declared an emergency about 11am Irish time.

The pilot reported they had an indication of a fire in the cargo hold but could not tell whether there was a fire. The crew donned their oxygen masks as a precaution.

The crew also reported a cargo door warning and requested clearance to descend to a safe altitude.

The jet descended from 36,000 feet to 10,000 which is standard procedure for both fire and pressurisation issues.

Four ambulances and a rapid response vehicle were sent to the airport along with fire brigade units from Shannon Town.

After the plane landed fire officers used thermal imaging cameras to check the fuselage for evidence of heat or fire.

It is understood no evidence of a fire was found and the animals were unharmed.

The aircraft remained at Shannon overnight and continued its journey to Amsterdam at 9.20am on Sunday.

Boxes of flowers could be seen on the cargo deck when the crew opened the nose cargo door.

In 2014, there were three incidents where flights diverted to Shannon because of fire scares on board. In each case heat from organic materials including fruit, vegetables and flowers in the cargo holds had activated on-board fire alarms.

1 Why are markets booming when a crash is on the way?
2 Could your old car be giving away all your secrets to its new owner?
3 Ryanair passenger traffic slumps 97% as shutdown restricts travel
4 Dunnes Stores trials online ordering from Cornelscourt outlet
5 Permission sought for €150m film and media campus in Wicklow
6 Vodafone to speed up 5G rollout using new technology
7 Covid-19: Publicans and restaurateurs row over calls for VAT cuts
8 AIB U-turn on mortgage block for those on Covid wage subsidy
9 Paschal Donohoe warns EU against going it alone on digital sales tax
10 Staff at Bewley’s cafe on Grafton Street are made redundant
Real news has value SUBSCRIBE