Little divides the three biggest supermarkets in the State 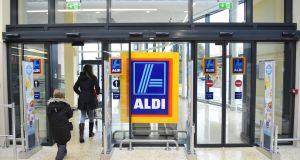 There is less than half a point between Aldi and Lidl in the discounter league, according to the latest figures from retail analysts Kantar. Photograph: Aidan Crawley

Less than one percentage point separates the share of consumer spending the three biggest supermarkets in the State command while less there is less than half a point between Aldi and Lidl in the discounter league, according to the latest figures from retail analysts Kantar.

The Irish grocery market share figures covering the 12 weeks to July 14th show that overall sales are up 2.7 per cent on last year although the figure marks a drop in growth compared with the 3.1 per cent increase recorded 12 months ago.

In terms of market share, Dunnes Stores is the most popular supermarket in the State with a share of 21.8 per cent of the total market compared with the 21.6 per cent share which Tesco has. Supervalu for its part had a share of 21.1 per cent.

Aldi continues to be slightly ahead of its main rival Lidl with the two shops put on 12.5 and 12.2 per cent respectively.

For the first time since March 2017, two retailers experienced a year-on-year decline with Tesco sales falling by 0.8 per cent and SuperValu’s sales down 0.5 per cent.

“But every silver lining has a cloud, and both grocers were always going to face an uphill battle to replicate that performance this year.”

Dunnes was the only one of the three traditional retailers to record year-on-year growth this period, with sales up 6.3 per cent.

While the average price consumers are paying has risen across the board, Lidl has seen the greatest increase as shoppers have bought more of its premium products.

“While Lidl has witnessed a slight rise in overall shopper numbers, its success encouraging people to trade up to its premium own label and branded lines is a key reason behind its growth. Nearly 100,000 more shoppers bought Lidl’s top-tier own label products this period compared to last, with an additional 13,000 shoppers buying branded goods as well,” Mr Faughnan said.