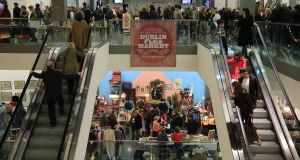 Sharon Greene, one of the organisers, wrote to supporters on Thursday to reveal that the market will be discontinued.

The popular Dublin Flea Christmas Market is to cease operations after losing its booking with the Point Square Shopping Centre .

The market was extended last year to take place over two long weekends in December and more than doubled its visitor numbers.

However, Sharon Greene, one of the organisers, wrote to supporters on Thursday to reveal that the market will now be discontinued.

“I am sorry to inform you that unfortunately we find ourselves in a position that we are not able to move forward with the market any longer,” she said.

“Over the last six months we have tried our best to figure out its future. We have applied for numerous funding applications, reached out to many organisations, individuals and public bodies for support.

“Since we got confirmation that the Point Square Shopping Centre would not take our December booking we have investigated alternative venues from large warehouses to outdoor marquees and even considered moving out of Dublin.

“The option that was top of our list in the last few months was erecting a 4,000 square metre marquee in an outdoor city space.

“This however would triple our already high event costs and would require us to hike up the trader fees and charge the public in at the door.”

Ms Greene said the organisers were proud of their achievements but that the financial risk that would be involved with continuing was too great to take on.

“We would be taking on a hefty financial risk to produce an event that is a long way away from the event that we believe in and are passionate about,” she said.

“Unfortunately we have come to realise that there is insufficient infrastructure and support forthcoming for an event of this scale and nature. We are devastated but we are very proud of what we achieved.”

The market described itself as “a social enterprise” that partnered with Local Enterprise Office Dublin City and Dublin City Council. It aimed to be “an accessible platform to market for up-and-coming independent Irish businesses”.

The Point Square Shopping Centre said it had no comment to make on the matter.