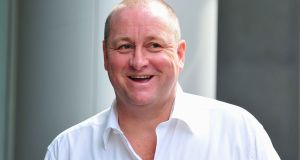 Sports Direct, the British sporting goods retailer controlled by Mike Ashley, said it may have erred in buying House of Fraser last year after problems integrating the department store business dragged down core earnings by 6 per cent.

The group warned on Friday that turning around House of Fraser, which it bought out of administration for £90 million, “will not be quick and it will not be easy”.

Sports Direct said: “On a scale out of five, with one being very bad and five being very good, House of Fraser is a one.”

“If we had the gift of hindsight we might have made a different decision in August 2018,” it added.

The company also disclosed that it had received a €674 million payment notice from the Belgian tax authorities. Sports Direct said the notice is not a formal tax assessment but a “process verbal” whereby the group will enter a mediation in order to respond to the authorities’ questions and provide them with documentation.

It said it believed that it is “less than probable” that material VAT (sales tax) and penalties will be due in Belgium as result of the audit.

Overall, the retailer said on Friday that it made underlying earnings before interest, tax, depreciation and amortisation (ebitda) of £287.8 million in the year to April 28th.

Excluding House of Fraser, underlying ebitda rose 10.9 per cent to £339.4 million – within the guidance Sports Direct issued in December of a 5 to 15 per cent improvement.

Sports Direct’s results were originally due on July 18th, but the company and its auditor Grant Thornton needed more time to prepare the accounts. They were rescheduled for 6am on Friday but, after further delays, were not released until 4:20pm.

The group also said its finance chief, Jon Kempster, would step down in September.

Some 62 per cent of the group’s equity is owned by Mr Ashley, its founder and chief executive, who also owns Premier League soccer club Newcastle United. Its shares have fallen 44 per cent over the last year.

The results delay is the latest in a long list of missteps by Sports Direct and Mr Ashley that have severely tested the firm’s relationship with investors. They have been critical of its corporate governance and employment practices.

Last year, Mr Ashley said he had been “stabbed in the back” by investors who had failed to support his board.

Since Sports Direct floated in 2007, there has been periodic speculation that Mr Ashley might take the firm private. However, analysts say he wants to retain Sports Direct’s listed status because he believes it gives the firm gravitas in its negotiations with key suppliers – Nike, Adidas, Puma and Under Armour.

The group’s core chain has been a relatively resilient performer in recent years, compared with a string of British retailers that have either gone out of business or closed stores in the face of subdued consumer spending and a shift to shopping online.

However, the group has also engaged in a raft of dealmaking that has complicated the business and stretched its management. This year it tried and failed to buy department store group Debenhams before it fell into administration, wiping out Sports Direct’s near 30 per cent equity stake.