Retail complex will be redeveloped in €60m plan by Tiernan Properties 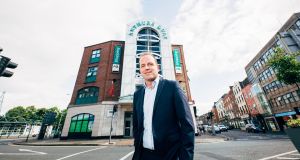 Limerick’s Tiernan Properties has secured Marks & Spencer as the anchor tenant for a major €60 million development on the city’s Arthur’s Quay.

The company founded by developer Michael Tiernan has confirmed that it will begin the planning process for a “transformational” redevelopment of the site.

Tiernan Properties, which built the existing Arthur’s Quay shopping centre in the late 1980s, said it had signed heads of agreement with Marks & Spencer. The British chain has been linked to various sites in Limerick city and suburbs over several decades, but has no outlet in the area.

The clothing, food and homewares retailer has now agreed to be a central draw in the 18,580sq m (200,000sq ft) mixed-use development, which will be located between the river Shannon and planned Opera Centre.

Tiernan Properties said there had been “significant interest” from other major brands in the project, which is expected to boost footfall in the centre of Limerick.

“We have been carefully planning the redevelopment of Arthur’s Quay for some time and have had significant interest in the project. However, this has been heightened over the past 12 months or so, thanks to the accelerated recovery taking hold in Limerick,” said Mark Tiernan, development director at the company.

The developers said getting a “key target” like Marks & Spencer on board “validates the wider project” and would prove pivotal for Limerick.

“A key aspect of the development is that it will bring the city and river together in a way that has not been done before,” Mr Tiernan added.

“For decades Limerick has been accused of turning its back on its prime asset, the River Shannon. This project will redress this imbalance.”

The company, which has also been involved in projects in Tuam, Athlone, Roscrea and Longford, said it would “intensify” its talks with Limerick City and County Council with a view to making progress on the development, with the whole being that it will be completed by 2022.

The redeveloped Arthur’s Quay, which will have an estimated cost of €60 million, is set to become the largest private mixed-use development ever in Limerick.

It arrives at a time of wider transformation in the city, with other projects including the neighbouring opera site, the planned University of Limerick campus, Limerick City and County Council’s plan to revitalise O’Connell Street, the International Rugby Experience museum and the Gardens International Project.

Under Limerick 2030: An Economic and Spatial Plan, an initiative launched in 2013, it is hoped that investment in the region will trigger an “economic, social and physical renaissance”.

1 Chris Johns: Ireland risks populist culture war over property and pensions
2 Javid’s EU divergence plans provoke industry backlash
3 Inbreeding poses major threat to Ireland’s thoroughbred horse sector
4 How to cope with an official audit by the Revenue
5 The Irish economy is thriving but if you’re not feeling it – here’s why
6 Not everyone ‘feeling full benefits of economic growth’
7 Will election mean delay in planned changes to State pension?
8 Slack lease the lure as ESB seeks €168m for Fitzwilliam 28
9 Barclays to cut 100 senior roles as lender seeks to rein in costs
10 Fitzwilliam Card Club casino in Dublin closes with loss of 80 jobs
Real news has value SUBSCRIBE