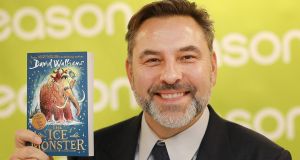 David Walliams in Eason’s flagship O’Connell Street store in Dublin, where he was signing copies of his book The Ice Monster. Eason has reworked its books offering in the hope of attracting more customers into its stores. Photograph: Julien Behal Photography

Eason shareholders had much to be happy about in its latest annual results. The company made an after-tax profit of €4 million, the highest since 2006. It is now debt-free and making good progress on the sale of its property portfolio, including netting €19 million from the sale of its St Margaret’s warehouse in Dublin.

However, the day-to-day trading environment for bricks and mortar retailers remains challenging, with Eason’s like-for-like sales in the Republic flat in spite of huge investment by the company in the business.

In his letter to shareholders Eason chairman David Dilger said its “main high street stores suffered the brunt of footfall migration, accounting for a €1 million reduction in revenues over the period across our main categories”.

Book sales were up 2.45 per cent, but stationery was down 2 per cent, newspaper sales declined by 5 per cent in volume terms, while magazines were down 10 per cent.

In Northern Ireland, retail store sales declined 3 per cent and the group closed stores in Newry, Craigavon and Fairhill in 2017, exercising break clauses in its leases.

Eason has worked hard to transform its business offering over the past decade to meet the twin challenges of recession and the migration of consumers to online.

The retailer has upgraded its store network, readjusted its core books offering and invested heavily in its digital platforms, with some success. It has cuts its costs across a range of headings, and has separated the retail and property businesses into different units, freeing up €20 million to invest in its stores.

And then there is Brexit.

“We face significant additional risks from further GBP currency depreciation, reduced consumer confidence, rising costs and significant trade disruption,” said Mr Dilger, who must be hoping that Boris Johnson doesn’t follow through on his threat to exit the EU by October 31st with no deal.