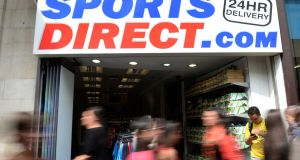 The group’s latest statement said it would update again at 1500 GMT but gave no reason for the push back.

Sports Direct had said on Wednesday it would publish the results on Friday and they were initially due at 0600 GMT. Its shares, 62 per cent of which are owned by Mr Ashley, were down 4 per cent at lunch time, extending year-on-year losses to 44 per cent.

“This is no way to run a public company,” said independent retail analyst Nick Bubb.

The results were originally due out on July 18th, but the company and its auditor Grant Thornton needed more time to prepare the accounts.

On July 15th Sports Direct blamed the delay on the complexities of the integration of the House of Fraser business it acquired out of administration last year for £90 million (€100 million) and the uncertainty over the future trading performance of this business, together with tighter regulatory scrutiny of its auditor Grant Thornton.

The results are keenly anticipated because they will reveal the extent of the problems Sports Direct has had with House of Fraser.

The results delay is the latest in a long list of missteps by Sports Direct and Mr Ashley that has severely tested the company’s relationship with investors, who have been critical of its corporate governance and employment practices.

Last year Mr Ashley said he had been “stabbed in the back” by shareholders who had failed to support his board.

Since Sports Direct floated in 2007, there has been periodic speculation that Mr Ashley might take the company private. However, analysts say he wants to retain Sports Direct’s listed status because he believes it gives the company gravitas in its negotiations with key suppliers - Nike, Adidas, Puma and Under Armour.

Sports Direct said on Wednesday the results were expected to be within guidance issued by the company in September.

Sports Direct’s core chain has been a relatively resilient performer in recent years, compared with a string of British retailers that have either gone out of business or closed stores due to subdued consumer spending and a shift to shopping online.

But the group has also engaged in a raft of dealmaking that has complicated the business and stretched its management.

This year it tried and failed to buy department store group Debenhams before it fell into administration, wiping out Sports Direct’s near 30 per cent equity stake.