Hot beverages, headphones and health stores among the strong performers 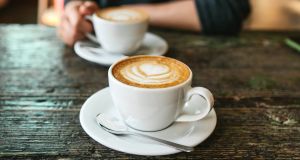 Hot beverage sales have risen 3.4 per cent in value year-on-year. May was an especially good month, with sales up 4.1 per cent. Photograph: iStock

Retail sales were “marginally up” in the second quarter of 2019 thanks to “robust” grocery sales, but the outlook for the sector remains a “significant concern”, according to the latest review by Retail Excellence Ireland.

The report, based on data from 4,500 stores across the State, shows that the value of like-for-like sales climbed 1.2 per cent on average compared to the same quarter in 2018. However, this was pulled up by a near 16 per cent rise in online sales.

Sales in the key grocery category swelled 3.6 per cent. Garden centres also performed well, with sales rising 4.8 per cent, as did health stores, where the value of sales was 4 per cent higher year-on-year. Hot beverage sales posted a 3.4 per cent climb.

Menswear sales were up 4.4 per cent, while childrenswear was up 4 per cent. Furniture and flooring did well too, with the value of sales increasing 2.2 per cent.

But womenswear sales grew by a less impressive 0.8 per cent, while gift and homeware sales fell 3.9 per cent. Other categories to sustain year-on-year falls included footwear, jewellery and lingerie, which were down 3.9 per cent, 4 per cent and 6.1 per cent respectively.

“Trading was boosted over the period due to a very robust performance in grocery, helped in turn by a sustained period of clement weather.”

Consumer electronics saw sales fall 2.2 per cent in value year-on-year, which Retail Excellence said was the result of having performed well in 2018 thanks to the incentive to purchase provided by the Fifa World Cup.

While the volume of TV sales was flat in the second quarter of 2019, the value of those sales fell 7.2 per cent, said Colm Mallon, client insight director for analysts GfK. Retailers offered heavy promotional pricing on older stock to make room for new models, he said.

“Conversely, headphones and headsets, the current jewel in the consumer electronics crown, continued to flourish, and saw value increase by 47 per cent from a volume increase of 17 per cent,” Mr Mallon said.

Sales of small home appliances rose 2.5 per cent in value year-on-year, with personal care products performing best, said GfK’s client insight director Helen Collins. Shavers were up 11 per cent, hair dryers up 8 per cent and hair stylers up 63 per cent, with prices for each of these driven by “hero” products.

“Overall growth rates in the Irish retail industry are declining, principally due to Brexit and eroding consumer sentiment,” Mr Fitzsimons said. “The outlook for the coming months is of significant concern.”

The report was prepared in conjunction with accountancy firm Grant Thornton, which highlighted an “air of caution” among consumers.

“The next set of performance figures will be crucial to see if this quarter’s slower pace of growth takes hold or represents a pause for breath among consumers,” said Grant Thornton economist Andrew Webb.

The 16 per cent surge in online sales was “adding to the pressure on traditional bricks and mortar retailers”, he added.