Retail sales rise in June despite threat of hard Brexit 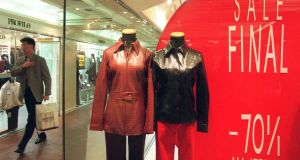 Retail sales rose by 1.2 per cent in June despite fears that the threat of a hard Brexit may be denting consumer confidence.

Figures from the Central Statistics Office (CSO) show the underlying trend was broadly flat, however, with sales up just 0.1 per cent year on year in June.

When the erratic car sales component is excluded, “core” retail sales decreased by 1.1 per cent in June but rose by 1.7 per cent in annual terms.

The Economic and Social Research Institute (ESRI) recently cautioned that Brexit was having a direct impact on the Republic’s economy with consumers more cautious about spending than they would normally be. The instalment of arch Brexiteer Boris Johnson as prime minister in the UK is unlikely to have allayed fears.

British retail sales contracted for a third month running in July, marking the longest stretch of decline since 2011 and suggesting an economic slowdown could continue into the third quarter, according to a report by the Confederation of British Industry this week.

A breakdown of the figures here show the sectors with the largest monthly volume decreases were clothing, footwear and textiles (-2.9 per cent ) and books, newspapers and stationery (-2.3 per cent).

The sectors with the largest month-on-month volume increases were furniture and lighting (4.9 per cent ) and motor trades (4 per cent).

“Retail sales continue to remain erratic on a monthly basis and are still swinging back and forth, but the underlying trend is positive,” economist Alan McQuaid said.

“Even with the fluctuation in consumer sentiment, overall personal spending has been positive in the past few years, boosted by the increase in the numbers employed in the country,” he said.

“ This is despite the fact that the weakness in sterling since the June 2016 Brexit referendum has enticed some shoppers to spend in Northern Ireland,” Mr McQuaid said.

“What happens on the currency and Brexit fronts will be important factors in determining overall consumer spending patterns in the Republic over the next twelve to eighteen months, but we are still expecting to see healthy personal consumption in the Irish economy in 2019 and 2020 as things currently stand,” he said.