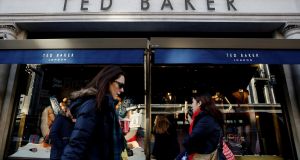 Ted Baker store on Regents Street in London. Chief executive Ray Kelvin has indicated he would support a deal to take the company private under the existing management. Photograph: Simon Dawson/Reuters

Shares in British fashion retailer Ted Baker surged as much as 17 per cent on Monday on reports that its founder and former chief executive Ray Kelvin would support a private equity buyout months after he quit over allegations of misconduct.

Mr Kelvin, who had been chief executive since the company’s launch in 1988, has indicated that he would support a deal to take the company private under the existing management.

Speculation of a buyout comes after Ted Baker’s shares lost more than a quarter of their value last month when the retailer warned that underlying profit for the year would fall short of analysts’ estimates.

The warning underlined the task facing Lindsay Page, who was promoted to permanent boss in April as the high street retailer sought to move on from misconduct allegations against its leading shareholder Mr Kelvin.

Ted Baker also reported its first drop in annual profit since 2008 in March as brick and mortar clothing chains suffered in the face of online competitors and as consumers reined in spending. – Reuters

1 Businesses call for more supports amid ‘devastating’ restrictions
2 Ryanair and Eir the worst for customer service during Covid crisis
3 Irish elearning company LearnUpon closes €47.4 million investment
4 What to consider if older person or loved one needs care at home
5 ‘Essential’ retailers risk a firestorm if they exploit the closure of the ‘non-essential’
6 Fair deal? Family at odds with hospital and each other not so sure
7 Central Bank finds litany of shortcomings in fund firms
8 Economists warn that GDP will fall again over Level 5 restrictions
9 Aldi to impose limits as Christmas toys go on sale
10 British renewables expert buys stake in NovaUCD firm
Real news has value SUBSCRIBE