Lidl has plans for 50 more stores 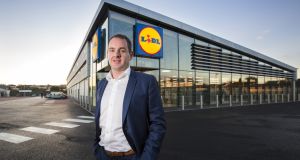 Mr Scally was speaking on Thursday in tullamore as the company opened its 200th store.

The German discount retailer now operates 162 stores in the Republic and 38 stores in Northern Ireland with two million customers passing through Lidl doors every week.

The chain has a market share of 11.4 per cent of the multi-billion euro supermarket business.

Mr Scally said: “The opening of the 200th store is part of a €200 million investment in 2019. In 2019, we plan to complete the construction of our new state-of-the art distribution centre and open ten new stores.”

“This development, the largest of its kind in Ireland, sees an investment of €100 million, employing nearly 2,000 people throughout the construction of the new 58,000m2 facility. One hundred new permanent staff will be hired for the new facility and 250 full-time staff will move from the current distribution centre,” Mr Scally said.

Mr Scally wouldn’t be drawn on the revenues generated by the Lidl business here and would only say that “revenue has grown year on year, exceeding our own expectations”.

He said: “Looking beyond 2020, we have ambitious plans for over 50 more stores across the island of Ireland and look forward to continuing to provide top quality products at market leading prices to more and more customers.