The sportswear-cum-retail giant has failed to publish its results, sending shares tumbling 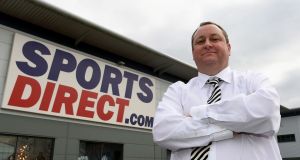 Sports Direct founder Mike Ashley has expanded his empire with a flurry of deals, from House of Fraser and a disastrous investment in Debenhams to Evans Cycles, Sofa.com and Game Digital. Photograph: Joe Giddens/PA Wire

It’s hard to shake off the feeling that Mike Ashley’s Sports Direct empire is finally careering out of control, derailed by a bewildering stream of ill-advised acquisitions and Ashley’s own ill-judged obsessions.

News on Monday that the sportswear-cum-retail conglomerate was unable to publish its results provoked alarm in the City, sending Sports Direct shares tumbling 10 per cent to their lowest level this year.

That wiped another £80 million or so from the value of Ashley’s controlling 61 per cent stake and piled on the pain for other shareholders who, like the rest of the City, have barely a clue what’s going on at the group.

Ashley had been due to publish his annual results on Thursday. These were keenly awaited in the City as it has been more than seven months since the last news on trading.

That’s a very long time in the fast-moving world of retail, where most other publicly-quoted companies provide updates on at least a quarterly basis. Ashley’s last words, back in December, were not encouraging. Business had been “unbelievably bad”, he said, warning that big-name retailers faced being “smashed to pieces” by ferocious price-cutting.

There appear to be a number of reasons for the delay, and none of them bode well. Ashley cites the “complexities” of integrating House of Fraser, the ailing department stores chain Sports Direct bought out of administration last year, together with “uncertainty” over its future trading performance.

Then there’s the question of the group’s auditors, Grant Thornton. The entire audit industry is under scrutiny for its slapdash work, but Grant Thornton is under more pressure than most, having signed off the books for such notable failures as Patisserie Valerie, the cake and cafes chain at the centre of an alleged accounting fraud, and Interserve, the outsourcing company which went into administration.

Just last week, the accounting watchdog named and shamed Grant Thornton as the worst of a bad bunch, slamming its work as “unacceptable” and “a matter of deep concern”. It is already investigating the accounting firm for its previous audits of Sports Direct.

Little wonder then that, with the regulator breathing down its neck, Grant Thornton is taking longer than expected to tally the figures – and that’s before you throw in Ashley’s acquisition frenzy.

Over the past two years Ashley has expanded his empire with a flurry of deals, from House of Fraser and a disastrous investment in Debenhams to Evans Cycles, Sofa. com and Game Digital. It also has stakes in Goals Soccer Centres and the upmarket lingerie chain Agent Provocateur.

Some analysts still believe Ashley has a grand plan, swayed by his vision that House of Fraser will become “the Harrods of the high street” and that Sports Direct is “the Selfridges of sportswear.”

But an increasing number are starting to fear there’s no method in his madness. Those fears have been heightened by the unexpected exit of a key member of his team, Karen Byers, who quit a fortnight ago.

Byers, who had worked with Ashley for almost three decades, was head of retail operations and was lauded by Ashley himself as the person who really ran the business. “She is the person who sets the rules, not me,” Ashley said a couple of years ago in one of his rare interviews.

Now she’s gone and analysts are fearful for the future of Sports Direct and Ashley without his right-hand woman. No real reason was given for her departure but disagreements over strategy must surely be top of the list.

Adding to Ashley’s woes is the emergence of the activist US hedge fund Coltrane Asset Management as a 3.3 per cent shareholder. It was Coltrane that pushed Interserve into administration earlier this year by rejecting its rescue plan. Its intentions towards Sports Direct are unclear at the moment.

As for Sports Direct’s audited results, the best guess from the group is that they’ll be ready between July 26th and August 23rd. Such an imprecise timeframe offers a glimpse of the accounting chaos the company must be in.

Sports Direct said on Monday there were “a number of key areas” of the audit that have yet to be concluded and which could “materially affect” profits.

One can only imagine the scenes at the group’s Shirebrook headquarters, as the auditors frantically comb through the books to meet the new deadline, one eye on the client and the other on the regulator. It may be hard to keep both happy.