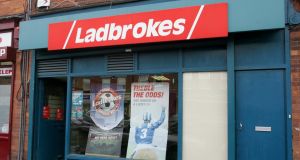 GVC, which in March warned legislation ordering a cut in the maximum stake on fixed odds betting terminals could lead to up to 1,000 shop closures, reported an almost 40 per cent fall in like-for-like revenue from its machines.

But it also said a 19 per cent overall fall in like-for-like retail revenue was better than it had feared, with some punters turning to its sports betting terminals instead.

Overall gaming revenue for the company, which owns brands including bwin, Coral, Crystalbet and Eurobet, rose 3 per cent in the second quarter ended June 30th, driven by continuing strong - 16 per cent - growth of online betting.

William Hill said at the start of July that it plans to cut about a third of its betting shops and jobs in Britain after the government slashed the maximum stake permitted on fixed-odds terminals, dubbed the “crack cocaine” of gambling by their critics.

Like other betting majors, GVC has also been leaning increasingly towards a rapidly growing US market which has exploded ever since regulations around sports betting were loosened.

GVC, which offers sports betting, casino, poker and bingo and has licences in more than 20 countries, said it expects Roar Digital, its US joint venture with MGM Resorts, to be up and running online ahead of the start of NFL season in September. – Reuters