Retailer has notified competition authority of the proposed transaction 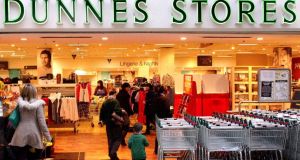 Dunnes Stores is proposing a takeover of JC Savage Supermarket Ltd in Swords, one of north Dublin’s best-known independent retailers.

Financial details of the deal have not been disclosed but the Competition and Consumer Protection Commission (CCPC) has been notified and has commenced a preliminary investigation.

JC Savage Supermarket Ltd is listed as owning the premises known as Swords Shopping Centre, from which it operates its sole grocery store JC’s Supermarket. It is located on Rathbeale Road just outside Swords village and close to the Swords Pavilions Shopping Centre, which contains a sizeable Dunnes outlet.

It was set up by the late Swords businessman, JC Savage, back in 1977 and is still owned and controlled by the Savage family.

Its business is known to have been impacted by the arrival of German discounter Lidl to the area. The most recent set of accounts for 2017 show the retailer’s turnover fell nearly 17 per cent to €22.4 million with the business making a financial loss of €594,564.

A spokesman said he could not comment on the proposed takeover, but confirmed the company currently employed 135 staff and was operating in a “super competitive” market.

Dunnes, the family-owned and media shy retailer, has more than a fifth of the €11 billion Irish grocery market. In recent years, it has sought to cement its position with the acquisition of Café Sol and craft butcher chain Whelans.

It also signed partnership deals for in-store concessions with Sheridans cheesemongers and the Nourish chain of health food stores. It was recently rumoured also to be interested in the Fallon & Byrne chain, and it made an approach for the Base Wood Fired Pizza restaurant group.

It was unsuccessful last year in a bid for the Donnybrook Fair chain, which was eventually bought out by SuperValu’s owner Musgrave, while it also tried to buy the Avoca group.

“Information such as financial details are commercially sensitive and we are restricted in the information that we can provide,” a CCPC spokeswoman said.

The competition authority typically holds a preliminary investigation when notified of a major transaction in a particular sector. Once a proposed transaction is notified, it has 30 working days to make a Phase 1 determination, unless there is a requirement for further information to be issued to the parties.

A full or Phase 2 investigation is undertaken if the initial review is unable to determine the competition impact.