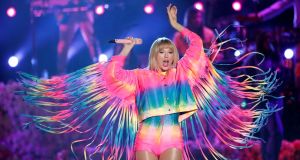 Amazon has taken to promoting its two-day event, which concludes Tuesday with a Taylor Swift concert. Photograph: Reuters/Mario Anzuoni/File photo

First it was bookshops, later retailers across the range felt the squeeze. Now, Amazon itself is beginning to feel the pressure of competition.

Ahead of its fifth annual Prime summer sale, the online retail giant has turned to an all-star cast to get its message out there. Will Smith is selling water. Kobe Bryant is pushing deodorant. Mark Wahlberg is peddling protein powder. And, as Bloomberg reports, YouTube star JoJo Siwa, known for wearing big, colourful bows in her hair, is hawking, well, big colourful hair bows.

It’s all a far reach from a business model that has relied on customer reviews to sell products.

Massive discounts, it seems, are no longer enough to make its showpiece sale stand out from the competition. Bloomberg notes that Walmart started a competing four-day sale on Sunday. Target is emphasising sales on its exclusive clothing and home goods ranges that shoppers can’t buy on Amazon. And eBay is drawing unwelcome attention to last year’s Prime sale website outage with a “crash sale” offering deals on smartphones, electronics and fashion.

And all of them are emphasising that their deals don’t require paid membership like Amazon. Apparently some 250 retailers are staging their own sales to compete with Prime Day, up from 194 last year, according to research firm RetailMeNot.

So Amazon took to promoting its two-day event, which concludes Tuesday with a Taylor Swift concert and is pushing celebrity-backed merchandise targeting every demographic to keep Prime Day in headlines and social media.

That appears to be working but, given the importance of the two-day extravaganza, the online behemoth can probably ill-afford workers in its second largest market to down tools. That’s what its German workers have done, with more than 2,000 staff at seven of Amazon’s self-styled “fulfilment centres” walking out over pay under the motto: “no more discount on our incomes”.

Challenging times then, but not enough to faze founder Jeff Bezos, who had time over the weekend ahead of the all-important Prime “Day” sale to take his seat in the royal box at Wimbledon for a classic men’s final.