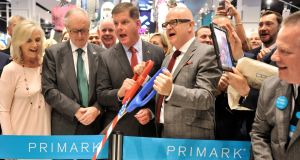 Arthur Ryan, second from left, and Alma Carroll at the opening of Primark’s store in Boston in 2015, alongside Mayor Martin Walsh and Primark chief executive Paul Marchant. Photograph: Josh Reynolds

Leading business figures yesterday paid tribute to Arthur Ryan, who led Penneys-Primark from just one store on Dublin’s Mary Street to a global fashion giant with more than 370 outlets and €8 billion a year in annual sales.

Mr Ryan died on Monday at the age of 83 following a short illness. Paul Marchant, who succeeded Mr Ryan at the fashion group’s helm in September 2009, hailed his predecessor as a visionary. “Arthur Ryan was a retail pioneer and a man of remarkable business acumen,” he said.

Stephen Vernon, chairman of Green Property, former owner of the Blanchardstown Shopping Centre in west Dublin where Penneys is a key tenant, said: “He was a great man. Arthur was a really popular person and in all our dealings with him he was a very easy to deal with. He led an amazing company.”

Michael O’Flynn, the Cork property developer, described Mr Ryan as a gentleman. “He was visionary and a pleasure to deal with,” he said.

Cormac Twomey, a veteran retailer who worked with Mr Ryan while he was with Dunnes Stores in Cornelscourt, Dublin, recalled him as someone who never forgot the lessons Ben Dunne senior drummed into them – buy it cheap and sell it cheap.

“He worked very hard and it worked for him,” said Mr Twomey. “He was something else.”

Mr Ryan founded Penneys in 1969 after Garfield Weston, whose family is the biggest shareholder in ABF, approached him to run a discount fashion store.

Shoppers embraced it, helping it to grow to 24 stores in 10 years, including a presence in the UK, where consumers dubbed it “Primani” or “Pradamark” in a nod to its affordable fashion formula.

The group adopted the Primark brand outside the Republic as it feared legal difficulties with US retail chain JC Penney, but it kept the Penneys tag here.

Penneys-Primark made one of its bigger breakthroughs under Mr Ryan’s leadership in 2005 when it acquired a large number of former Littlewoods stores in Britain.

That year, Drapers named him number one in its Top 100 Most Influential People in Fashion list.

Outside the Republic, Primark trades in 11 countries: the UK, Spain, Portugal, Germany, the Netherlands, Belgium, Austria, France, the US, Italy and Slovenia.

Recently, parent company ABF reported that Primark’s sales were up 4 per cent in the first three-quarter of this financial year.

Mr Ryan, who was born in Dublin, went to Synge Street Christian Brothers School. He emigrated to London where he worked with tailors Swan & Edgar, among others, before returning to Dublin in the late 1960s to join Dunnes Stores.

Mr Ryan, who had a home on Lansdowne Road in Dublin, always closely guarded his private life. He and Alma Carroll have a daughter, Jessica, who runs a beauty business.

Four years, ago, Mr Ryan’s son Barry Ryan, one of four children from his previous marriage, drowned while attempting to rescue his own son and his son’s girlfriend from drowning, near Baltimore in Co Cork.

Mr Ryan had an honorary doctorate in philosophy from DIT, now known as Technological University Dublin. The college named a retail centre after him.