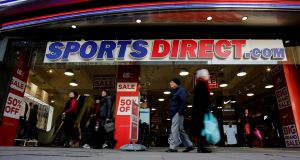 Sports Direct’s core chain has been a relatively resilient performer in recent years compared with a string of British retailers who have collapsed. Photograph: Reuters

Retailer Sports Direct has delayed publishing its annual results, warning that problems integrating its purchase of House of Fraser stores and increased scrutiny of its accounts could affect the financial guidance it gave in December.

Shares in the company, controlled by Newcastle United soccer club owner Mike Ashley, dropped as much as 7 per cent in early Monday trading.

Sports Direct described trading in December as “unbelievably bad”. While it did not give an update on its core sporting goods stores on Monday, it referred to complexities in integrating the House of Fraser (HoF) chain it bought last year and “uncertainty as to the future trading performance of this business”.

“HoF is clearly a disaster area, so this is a serious situation,” said independent retail analyst Nick Bubb.

Sports Direct’s core chain has been a relatively resilient performer in recent years compared with a string of British retailers who have collapsed in the face of subdued consumer spending and a shift to shopping online.

However, the group has also engaged in a raft of dealmaking that has complicated the business. It recently spent time trying – and failing – to buy department stores group Debenhams, after purchasing House of Fraser out of administration last year.

On Monday the company said it also now controlled video gaming retailer Game Digital, “thereby adding to the complexity of the business”, according to Mr Bubb.

Sports Direct, which is 61 per cent owned by Mr Ashley, said the timing of its results had also been affected by a review by Britain’s accounting watchdog of Grant Thornton’s audit of the company’s results for the year ended April 29th, 2018. It said that meant the company had to compile more information than in previous years.

“Sports Direct believes its accounts and their audit to be at an advanced stage,” it said.

The company had planned to publish results for the year ended April 29th, 2019, on July 18th, but said it now expected to do so between July 26th and August 23rd.

“Sports Direct would note that its core principles in regards to its financial statements are to be conservative, consistent and simple,” it said.

Mr Ashley had said in December there were significant challenges for House of Fraser, but there was also a “fantastic opportunity” to revive the chain. – Reuters

1 ‘I’m so lucky to be in the Caribbean – a million miles from Derry Girls’
2 Tax and the Pandemic Unemployment Payment: Your questions answered
3 HSBC board rethinks overhaul and seeks even deeper cuts
4 Brexit, coronavirus and bark beetle pose challenges for Coillte
5 Joint accounts: if one of us dies, can the other access the money?
6 Ireland’s recovery is partially due to us learning our lesson
7 Ryanair to launch routes between Jordan and continental Europe
8 Elon Musk’s Starlink could take wonders of night sky away from us
9 ‘I left my home, my boyfriend and my dog and upped sticks’
10 Ireland’s top tech companies: who pays the most?
Real news has value SUBSCRIBE