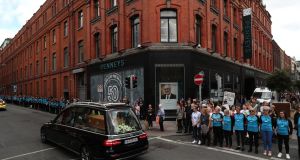 Penneys-Primark founder and chairman Arthur Ryan was “fun, fantastic and loyal” his wife Alma told mourners at his funeral on Saturday.

Mr Ryan, who founded the multinational fashion chain 50 years ago with £50,000 backing from the Weston family, died this week at the age of 83.

His wife described the years she spent with her late husband as “fantastic and fun” in an address read to a packed Sacred Heart Church in Donnybrook, Dublin, by her son.

“He was the most loyal man you could ever meet, if Arthur could help somebody, he did,” she said.

He never stopped working nor thinking about work, she told the family, friends and colleagues at the funeral Mass.

Despite 39 radiotherapy sessions following a cancer diagnosis a few years ago, he never missed a day at the Penneys-Primark HQ on Mary Street in Dublin.

Under his leadership, the chain grew from one store in the Republic to 370 across 12 countries. Outside the Republic, the group is called Primark to avoid clashing with US retailer JC Penney.

Staff dressed in blue and black trademarked T-shirts formed a guard of honour at the church and when the hearse passed the Penneys store on Mary Street.

Republic of Ireland football manager Mick McCarthy, in a tribute read by Paul Marchant, Primark chief executive, thanked Mr Ryan for his constant help and support and above all his friendship.

In his own eulogy, Mr Marchant told the gathering that after spending an evening with Mr Ryan in London, he “desperately” wanted to join the fashion chain.

“He helped to create more retail careers and his legacy improved more lives than anyone else,” Mr Marchant said.

Mr Marchant, who succeeded Mr Ryan at the group’s helm 10 years ago, told the crowd that he learned much from his predecessor. “He had a passion for retail and for satisfying his customers,” he said.

Fr Brian D’Arcy, who celebrated the Mass with Donnybrook parish priest Fr Lorcan O’Brien, said Mr Ryan returned from London, where he had emigrated, in the 1960s intending to use his skills to create jobs in the Republic.

“He used his talents for the betterment of the community he lived in,” Fr D’Arcy said.

At the beginning of the ceremony, George Weston said that Mr Ryan loved his country and was someone who was always willing to help those in need. “He was a hard man but a big softie,” Mr Weston added.