Struggling fashion chain made pretax loss of £85.4m for year to April 27th 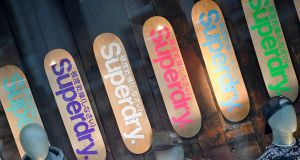 The returning founder of Superdry warned it would take time to fix the struggling British fashion group on Wednesday after a £130 million (€144 million) charge for poorly performing stores pushed it into an annual loss.

Julian Dunkerton won a bitter battle to rejoin the board in April prompting the resignation of all its directors. Also the biggest shareholder, he warned its performance in the new financial year would “reflect market conditions and the historic issues inherited.”

Superdry’s underlying pretax profit slumped 57 per cent to £41.9 million - at the bottom of the range of analysts’ forecasts that have been cut after a string of warnings. Group revenue was flat at £872 million.

Superdry, whose shares have crashed 66 per cent over the last year, said the non-cash onerous lease and impairment charges booked in its accounts reflected decreasing store revenues and its cautious recovery plan.

Mr Dunkerton’s initial focus has been on getting product ranges right and improving its e-commerce proposition. He has increased the number of products sold online, put more stock into flagship stores and cut back promotions to improve profit margins.

“The issues in the business will not be resolved overnight,” said Mr Dunkerton, the interim chief executive.

“Although we are only three months in, our initiatives are gaining some early traction, and I am confident we are doing the right things to ensure that over time Superdry will return to strong profitable growth.”

Superdry ended the year with cash of £35.9 million, which it said supported the maintenance of its dividend policy. It proposed a final dividend of 2.2 pence, making a total of 11.5 pence. – Reuters

1 Michael Smurfit: ‘I asked Trump to invite me to the White House for my 80th birthday’
2 Small businesses are cannon fodder in zealous anti-virus experiment
3 ‘I’m so lucky to be in the Caribbean – a million miles from Derry Girls’
4 ‘Never mind GDP; the most fundamental job of any leader is to keep his people alive’
5 Ireland stands to benefit in a big way from investing in public transport
6 Coronavirus: Technopath offers employers not-for-profit antibody tests
7 Irish business of Carluccio’s restaurants to be wound up
8 Ibec wants all businesses to be allowed reopen next month
9 Tax and the Pandemic Unemployment Payment: Your questions answered
10 Household savings soar as consumers stop spending
Real news has value SUBSCRIBE