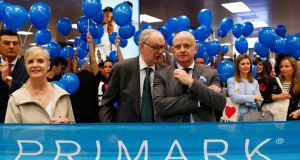 Arthur Ryan, founder and chairman of Irish retail phenomenon Penneys/Primark, has died at the age of 83 following a short illness.

Mr Ryan ran the first Penneys store, which opened in Mary Street in Dublin in 1969. Born in Dublin, Mr Ryan was one of a tight-knit leadership team that transformed the Irish fashion retailer into a global success story known for providing fashionable clothing at low prices.

Trading outside Ireland as Primark, the fashion retailer is part of the UK listed company Associated British Foods (ABF). It has 370 stores in 12 countries and annual revenues of more than €8 billion.

Mr Ryan stepped down as managing director of Penneys/Primark in 2009, moving to the role of chairman. He had legendary status within the fashion trade both here and abroad.

Primark chief executive Paul Marchant offered sympathies on behalf of everyone at the company to Mr Ryan’s wife, Alma, and their family. “Arthur was a truly gifted retailer and a visionary leader,” he said. “I was fortunate enough to work closely with him and experience first-hand his sharp mind and innovative thinking.”

George Weston, chief executive of ABF, said Mr Ryan would be remembered as one of the “great giants of retailing”. “Arthur Ryan made fashion accessible to all and his legacy looms large. He built a phenomenal world-class retailer, the foundations of which will always belong to Ireland.”