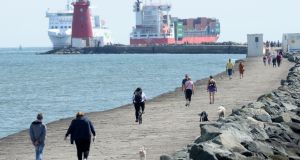 Dublin Port is seeking planning permission for an estimated €320 million worth of projects that make up the second stage of its main expansion plan.

The State-owned Dublin Port Company is working on a masterplan that will bring it to “its maximum and ultimate capacity” by 2040, according to its chief executive, Eamonn O’Reilly.

The company said on Tuesday that it has asked An Bord Pleanála for permission to go ahead with the second stage of the plan, which involves five key projects scheduled to be finished by 2035.

“If we were building all of it today it would cost us €320 million,” Mr O’Reilly estimated. He cautioned that it would not be possible to give a final figure until Dublin Port knew what conditions could be attached to any planning permission it received and had calculated for both detailed design and construction inflation.

The company’s board recently approved a proposal to allow it borrow an extra €300 million if needed.

The masterplan’s second stage provides for a new roll-on roll-off jetty for ferries up to 240m-long, lengthening an existing berth for container ships, redeveloping an oil berth so it can handle container traffic, re-orienting another existing berth and consolidating passenger terminals.

Redeveloping existing berths will give the port the capacity to handle one third of the increases in ferry and container ship traffic that the company expects between now and 2040, and cope with growing ship sizes.

Dublin Port is seeking 15-year planning permission for the scheme. It has applied directly to An Bord Pleanála as the development is regarded as critical infrastructure, which falls under the board’s jurisdiction.

The company said that it consulted with communities, customers, State agencies, government departments and other public bodies before applying for permission. It will hold information days in neighbourhoods around the port in coming weeks.

Dublin Port is now working on the plan’s first stage, redeveloping Alexandra Basin, a key part of its harbour, to allow it accommodate bigger vessels.

The port operator expects to spend €1 billion on redevelopment over the next 10 years. Mr O’Reilly explained that this included some of the cost of the masterplan’s second phase, but not all of it, as that stage extends beyond the next decade. He pointed out that the masterplan will enable Dublin Port to handle twice the volume of traffic that it now does without expanding its actual area.

“We have made a commitment that there will be no more infill in the bay,” he said.

This means that the company must work on increasing capacity while managing ongoing growth and dealing with contingencies such as Brexit, which cost it €30 million last year.

1 We are ‘sale agreed’, but can we go back with a lower offer?
2 Working from home: New costs, new stresses and little relief
3 HSBC board rethinks overhaul and seeks even deeper cuts
4 Eason’s job cuts, ESB shelves Poolbeg generator, and Pubs v FBD in court
5 Eason to lay off 150 staff as it prepares for June reopening
6 ESB shelves plan for €500m electricity generator at Poolbeg
7 Joint accounts: if one of us dies, can the other access the money?
8 ‘Over 1,000’ pubs have interest in Covid-19 insurance test case
9 Covid-19 has turned the volume up on musicians’ cut from streaming
10 Lucinda Creighton’s consultancy agrees partnership with US lobbyist
Real news has value SUBSCRIBE