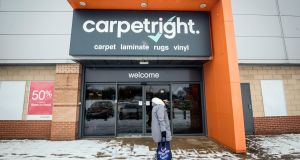 Britain’s biggest floor coverings retailer Carpetright issued a third profit warning in four months and said it was talking to lenders to shore up its balance sheet – the latest stores group to suffer from UK consumers reining-in spending.

Its shares lost over a quarter of their stock-market value on Thursday.

Carpetright, which has 20 stores in Ireland, said UK trading conditions since it last updated on January 19th had “remained difficult characterised by continued weak consumer confidence”.

Carpetright forecast a small underlying pretax loss for the year to April 28th.

“The group is therefore proactively engaged in constructive discussions with its bank lenders in order to ensure it continues to comply with the terms of its prevailing bank facilities,” it said.

It said its lenders have indicated that they remained “fully supportive”. – PA