Irish profits up at Waterstones despite sales decline 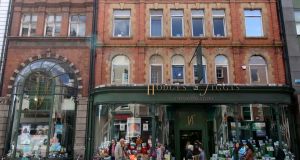 Bookstore chain Waterstones reported an almost 29 per cent increase in profits at its Irish branches last year despite a fall in the volume of sales in the period.

Waterstones has three branches in the Republic including the Hodges Figgis bookstore on Dublin’s Dawson Street.

The accounts for Waterstones Booksellers Ireland Limited show the group employed 77 people in the year, all of whom were involved in sales. Despite having the same number of employees in the previous year, wage and salary costs increased almost 4 per cent to €1.9 million.

Aside from its UK and Irish operations, Waterstones is active in the Netherlands and Belgium. The Irish arm signalled an increase in profits due to “continued improvement in operational efficiencies and margin improvements”.

“Waterstones continues to follow the same strategy that it adopted following its acquisition from HMV Group in June 2011. It seeks to improve the standards of bookselling within its shops by training and enhanced career development of its booksellers, and supports this with investment in the shops themselves and the operational infrastructure,” a review of the business said.

In line with a number of businesses active across the Ireland and Britain, Waterstones recorded a loss in foreign exchange transactions of €112,000. Despite this, the company didn’t list Brexit as a risk. It did recognise the threat from online retailers, however, and noted “the competitive nature of its markets, with particular emphasis on the developing methods of digital delivery of products and content”.

The 280-store Waterstones chain returned to profit in 2016 for the first time in since the company was bought from HMV for £53 million in 2013.

Waterstones Ireland’s immediate parent undertaking is Waterstones Holdings Limited. Its ultimate parent company is Alpha Global Limited, a British Virgin Islands-registered company, the beneficial owner of which is Nicolai Mamut, the son of Russian billionaire Alexander Mamut who acquired Waterstones from HMV in 2011.