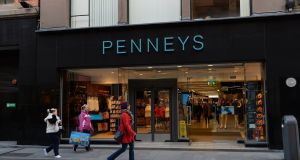 AB Foods said Primark, which trades in Ireland as Penneys, would enjoy better margins in the second half of the year. Photograph: Cyril Byrne

Associated British Foods (AB Foods), parent group of fashion retailer Primark, which trades here as Penneys, said profit growth would accelerate thanks to a boost from the weak US dollar and a better buying performance.

AB Foods said Primark would enjoy better margins in the second half of the year, with the wider group remaining on track to hit annual profit targets.

Stripping out the impact of exchange rates, Primark sales lifted 7 per cent for the 24 weeks to March 3rd, as it reaped the rewards of more retail selling space.

Like-for-like clothing sales are expected to drop 1 per cent over the period after takings took a hefty hit from unseasonably warm weather in October.

However, it said Primark sales would push 1 per cent higher for the 16 weeks to March 3rd, bolstered by record sales in the week before Christmas and “encouraging” trading for its new spring and summer range.

Updating the market, AB Foods said: “Primark is performing very well in the UK with sales 8 per cent ahead of last year, and a strong increase in our share of the total clothing market.

“This was driven by a 4 per cent growth in like-for-like sales, an increase in selling space and the breadth of our consumer offering. Our business in the US continues to make progress.

“We expect an acceleration in Primark profit growth in the second half as a result of an improvement in margin over the same period last year.

“This will be driven by better buying and some benefit of the recent weakness of the US dollar on purchases which will more than offset an expected return to a more normal level of markdowns, compared to the very low level achieved last year.”

The FTSE 100 group said it was pencilling in a drop in revenue and profits at its sugar arm, as it grapples with a hit to its UK and Spanish business caused by “significantly lower” EU sugar prices.

Operating profit in its grocery business is expected to be “well ahead” of last year for the 24-week period, despite UK sales at Twinings tea taking a hit from “strong competition in green teas and infusions”.

Despite suffering on home soil, Twinings is set to improve its performance across the US and Italy, while Ovaltine chalks up strong growth in Switzerland, Germany, south Asia, Nigeria and Brazil.

Shares were up more than 1 per cent in morning trading on the London Stock Exchange. – PA