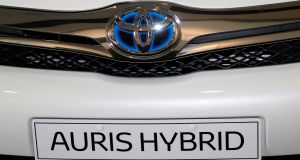 New car sales were down 3.5 per cent in the first two months, but used imports are surging ahead, up 17.3 per cent on last year.

The backlash against diesel continues apace. Diesel engines now account for 57.35 per cent of new car sales compared to 66.3 per cent at the same time last year. However, despite strong financial incentives for buyers, new electric-car sales are down 23 per cent, with just 176 registered to date. That represents just 0.33 per cent of the total new car sales this year.

There is better news around hybrids, which now account for 6 per cent of new car sales, totalling 3,200 vehicles. Of these, 177 are plug-in hybrids, which run on full-electric mode for up to 50km, after which time they operate as normal petrol-electric hybrids.

According to Alan Nolan, director general of the Society of the Irish Motor Industry (SIMI), as a consequence of the shift from diesel, the average CO2 emissions for new cars registered this year has increased by 2.1 per cent.

Toyota is the bestselling car brand this year, largely on the back of its large number of hybrid models. The Japanese marque recorded 5,717 new registrations so far this year, ahead of Hyundai with 5,422, Volkswagen with 5,390 and Ford with 5,249. The bestselling model in the Republic remains the Hyundai Tucson crossover with 2,112 sales, ahead of its closest rival the Nissan Qashqai with 1,952.

At the premium end of the market, Audi has overtaken Mercedes-Benz, with the VW Group-owned brand recording 2,218 registrations, ahead of Mercedes on 2,161. BMW is some way behind on 1,501.

In terms of the regional breakdown only three counties – Kilkenny, Offaly and Waterford – recorded a rise in registrations in the first two months.

With used imports coming in from the North and Britain, the Border counties suffered significant drops in sales, with registrations in Leitrim down nearly 20 per cent, while Cavan registrations fell 17 per cent.

In terms of commercial vehicle sales – always a bellwether for economic activity – sales of vans and other light commercial vehicles are up 6 per cent this year at 9,356, but the number of new heavy goods vehicles registered for the first time has dropped 11 per cent to 646.

According to SIMI’s Alan Nolan: “ The increase in the light commercial vehicle sector reflects the strong economic growth for businesses, particularly in the local economy, while HGVs may be more impacted by Brexit concerns.”