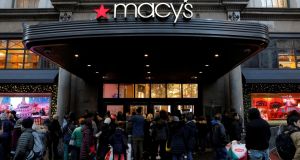 Macy’s on Tuesday reported greater-than-expected growth in same-store sales for the fourth quarter, and forecast a return to annual comparable sales growth in 2018, sending its shares up more than 11 per cent in early trading.

The biggest US department store chain, which has become emblematic of the decline of brick-and-mortar retail in the face of Amazon.com, has not seen comparable sales grow on an annual basis for three years.

Benefiting from a broadly strong US holiday shopping season, Macy’s also reported better-than-expected quarterly profit on revenue that was in line with estimates.

The mid-range retailer has closed more than 100 stores since 2015, and slashed thousands of jobs as mall foot traffic has plummeted as customers defect to online and fast-fashion sellers.

Fourth-quarter sales were helped by a new loyalty programme, a fashion-forward marketing revamp, improvements to Macy’s mobile app and a push to roll out new private-label items more quickly.

Sales at Macy’s stores open more than 12 months, including in departments licensed to third parties, rose 1.4 per cent in the quarter ended February 3rd.

For fiscal 2018, Macy’s said it expects comparable sales on both an owned and an owned-plus-licensed basis to be flat to up 1 per cent, and total sales to be down between 0.5 per cent and 2 per cent.

Comparable sales fell 2.2 per cent in fiscal 2017 on an owned basis and 1.9 per cent on an owned-plus-licensed basis.

Macy’s, which has existed in some form for more than 150 years, is struggling to right itself and has rented or sold real estate, even looking at unloading floors at its storied Herald Square flagship in New York.

Before Tuesday Macy’s shares were up more than 50 per cent since November, but are lower than a mid-2015 peak of more than $73. – Reuters