Toys R Us collapses into administration in UK 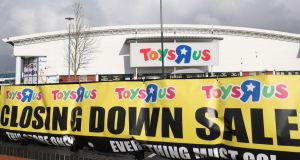 The private equity owners of Toys R Us heaped $5 billion of loans on to the business and it buckled under the strain. Photograph: PA Wire

The UK arm of Toys R Us has collapsed into insolvency, putting thousands of jobs at risk just two months after the chain won creditor backing for a sweeping restructuring plan to tame its unmanageable rent bill.

The retailer operates four stores in the North: two in Belfast, one in Lisburn and one in Derry.

Executives had been battling to raise cash to pay a tax liability that fell due this week, but the efforts collapsed after a number of private equity funds and restructuring specialists walked away.

Insolvency specialists at Moorfields have begun the process of closing its UK operations, which employ nearly 3,000 people and has an estimated funding shortfall of at least £25 million (€27 million) in its pension scheme.

Since starting out in America during the post-second world war baby boom of the 1950s, Toys R Us evolved to become a “category-killing” big-box store chain, and was taken private in 2005 by a consortium of buyout funds that included Bain Capital, KKR and Vornado Realty Trust.

The private equity owners loaded the company up with $5 billion (€4 billion) of long term loans, which forced the chain to spend more than $250 million on debt service alone - a burden that analysts say may have made it harder to invest in fresher-looking stores.

It filed for bankruptcy in the US in September, triggering a tussle between pension regulators, landlords and executives over the future of the UK chain.

The Pension Protection Fund, an industry-backed lifeboat that is now expected to bail out the retailer’s stricken pensioners, threatened in December to block a sweeping restructuring plan that involved closing at least a quarter of its 105 UK stores.

Officials relented after being promised £9.8 million in pension contributions that were to have been paid over three years.

But the reprieve proved temporary.

Joint administrator Simon Thomas announced that the retailer’s online store would close immediately, while the physical stores would stay open and offer discounts to clear out stock.

He urged customers to redeem any outstanding gift certificates at once, and pleaded for anyone interested in buying the business to contact the administrators “as soon as possible”.