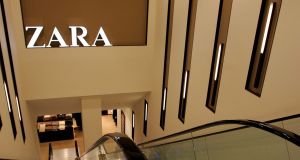 Spanish giant Inditex, the world’s largest clothing retailer and the owner of the fashion chain Zara, is in line for a €4 million windfall from what appears to be the winding down of the Irish unit that handles most of its global online sales.

The Dublin-registered company, ITX Fashion, which has long been a vital cog in the global tax planning of Inditex, plans to free up cash by restructuring its capital and reserves, according to official company documents filed this week.

The restructuring will release €4 million of capital that will be paid to a Dutch holding company for Zara, according to the directors of ITX Fashion, through which all online sales from the US, Mexico, Japan and China are funnelled.

The decision was taken at a board meeting for the Irish company held last month in Spain. The move leaves the Irish unit with assets of just €101 and liabilities of zero as of January 31st, the documents say. A year ago, the unit had total assets of €288 million.

This apparent hollowing out of the ITX balance sheet suggests that Inditex, which also owns brands such as Pull & Bear and Massimo Dutti, has decided to wind down the activities of its Irish online unit, which has attracted the ire of tax campaigners in the past.

When asked if the effective reduction of the value of ITX’s assets to zero meant the unit was being stood down, Inditex replied that the activities of the Irish company “have been gradually adopted” by other parts of its empire.

Inditex has previously faced strong criticism from European politicians for its use of the Republic as a base to facilitate aggressive tax planning.

In 2016, a report published by a European grouping of Green Party politicians said Inditex had saved “at least” €585 million in taxes by using aggressive corporate tax avoidance techniques in Ireland, the Netherlands and Switzerland.

That report suggested that locating ITX Fashion in Ireland rather than Spain saved Inditex almost €30 million in taxes between 2011 and 2014.

In recent years Inditex stymied some of the criticism of tax campaigners by wiring European sales through a Spanish entity.

The most recent accounts for ITX, however, show that it was still moving more than €300 million annually through the Dublin unit from outside Europe.

1 Barclays scraps system monitoring how long staff spent at desks
2 Garda mobile contract win causes concern over Eir’s use of Huawei kit
3 Nineteen staff made redundant by Nama share €1m
4 Varadkar resigns amid warning impasse will hit the economy
5 Facing the music: how China is buying Germany’s piano industry
6 Former Enron CFO Andrew Fastow: ‘You can follow all the rules and still commit fraud’
7 Poll on second election, concerns over Irish pension gap, and Ireland’s rich list
8 Whiskey a go go: sales top $1bn in US
9 How can I view my dead brother’s will if I’m not the executor?
10 Apple and Samsung announce unthinkable partnership
Real news has value SUBSCRIBE