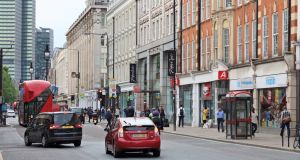 British electrical retailer Maplin entered administration on Wednesday after failing to find a buyer for the business, its chief executive said in a statement, becoming another victim of tough conditions on the high street.

Maplin operates over 200 stores in Britain and Ireland, and became the second high street chain to collapse on Wednesday after Toys R Us also entered administration.

In the Republic, Maplin has six outlets including three in Dublin, and one in Limerick, Cork and Galway.

“I can confirm this morning that it has not been possible to secure a solvent sale of the business and as a result we now have no alternative but to enter into an administration process,” Maplin chief executive Graham Harris said.

“During this process Maplin will continue to trade and remains open for business.

“The business has worked hard over recent months to mitigate a combination of impacts from sterling devaluation post Brexit, a weak consumer environment and the withdrawal of credit insurance.

“This necessitated an intensive search for new capital that in current market conditions has proved impossible to raise.

“These macro factors have been the principal challenge not the Maplin brand or its market differentiation.

“We believe passionately that Maplin has a place on the high street, and that our trust, credibility and expertise meets a customer need that is not supported elsewhere,” he said.