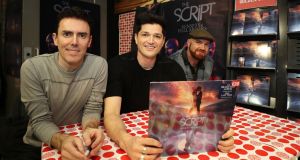 Accounts for the band’s UK based Madnotes Entertainment Ltd show that accumulated profits increased to £795,559 in the 12 months to the end of March laccordst.

Aing to figures from trade industry journal, Pollstar, The Script generated $20 million (€18 million) at the box office across 2018 when they played to 335,708 fans across 49 dates in 44 cities promoting their ‘Freedom Child’ album.

2020 is set to be even busier for the band as it tours its recently released Sunsets & Full Moons album with three dates at the 3Arena in Dublin in March and an outdoor gig at Irish Independent park in Cork in June.

The band has also lined up a tour of the UK in February and March.

Last year’s profit is more than seven times the £104,513 profit recorded in the prior year when the company paid its shareholders a dividend of £408,000.

The accounts are signed off by band members, Danny O’Donoghue and Mark Sheehan.