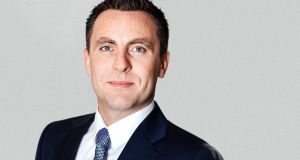 Harvey Duthie will be responsible for shaping University of Limerick Foundation’s fundraising drive.

The University of Limerick’s (UL) fundraising arm has appointed a new chief executive.

The UL Foundation, which has raised approximately €200 million for the university since its inception in 1989, said Harvey Duthie would take up the role of chief executive as well as university vice-president of development later this month.

He replaces David Cronin, who has been appointed as new president and chief executive of Ireland Funds America.

In his new role, Mr Duthie, originally from Co Galway, will be responsible for shaping the group’s fundraising drive.

Mr Duthie has spent the last 10 years in London working on major global fundraising campaigns. His clients have included the Bill and Melinda Gates Foundation, Oxford University, Africa Centres for Disease Control, UNHCR and Singapore Management University, among others.

“Harvey will serve as the senior staff member of the foundation, providing guidance and support to the board, the chair and the president, as well as to university faculty and administrators,” UL president Des Fitzgerald said.

“Harvey will be responsible for the formulation, development and implementation of the foundation’s fundraising policy and strategy and will have the lead role in the solicitation of gifts,” he said.

“As a senior executive with demonstrable experience of leading successful capital campaigns and fundraising initiatives with more than 50 clients across the United Kingdom, Ireland, mainland Europe and the United States, Harvey has extensive experience of planning, managing, and implementing programs aimed to achieve fundraising goals and mission impact,” he said.