Alexa, get my song to number one 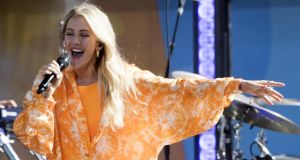 Ellie Goulding’s third UK number one shows that this is no longer simply the age of streaming, but the age of the smart speaker. Photograph: Debra L Rothenberg/WireImage

New year, new string of advice pieces on how to best live in “the present moment”, whatever that is. But for this semi-reformed music chart nerd, January also means the next turn in BBC Four’s cycle of Top of the Pops repeats.

Goodbye 1988, hello 1989: Kylie Minogue and Jason Donovan are about to be number one together, Madonna will be asking the immortal question “God?” and the Bangles are warming up their Eternal Flame. It is very nearly the 1990s, and Black Box will be along in a minute to Ride on Time.

In 2020, the singles chart, like pretty much everything else to do with music, behaves and functions so completely differently than it did in the heyday of the cassette that it would take a time-traveller another 30-plus years to figure out how.

The confusion would be similar to a football fan dematerialising in the present day to find that not only is Leicester City second in the table and past champions of this thing called the Premier League, the fundamentals of the game have been totally upended by technology. The analogy falls down soon after, but the music and football business do have one muscle-flexing player in common: Amazon.

In European football, the ecommerce and media giant is a hungry, yet still minor rights-holder. In music, it has just made itself heard.

Courtesy of Amazon Music and Alexa, the final official UK number one of the 2010s was claimed by English singer-songwriter Ellie Goulding and her “Amazon Original” cover of Joni Mitchell’s Christmas-tinged River.

There was no revolutionary updating here, no divisive reinterpretations. As impeccably clean as the recording sounds, Goulding’s version would scarcely have stuck out much if it had been released at any time since Mitchell’s River first appeared as a 1971 album track.

It is the manner in which it got to number one that is new: River’s surge to the top spot was achieved despite the fact that it wasn’t available on Spotify, Apple Music or Google Play. Unless you watched the video on YouTube or switched on the radio, the only place to hear it was through Amazon, either via its paid-for music services or on the free ad-support service included with certain Echo devices. And it seems millions did just that, many by speaking words such as “Alexa, play some Christmas music”.

Thanks to Amazon’s careful curation, this elevated River to the UK number one for the December 20th-26th period – there was no similar traction in the Irish market, where Lewis Capaldi reigned supreme.

Being number one didn’t mean it was the most listened-to song that week on audio streaming services, which now almost entirely determine the chart, with only a fraction of the total “units” deriving from video streams and even fewer from paid digital downloads. Wham! and Mariah Carey garnered more streams than Goulding overall – Last Christmas actually set a new UK streaming record – but under chart rules their festive staples would had to have been twice as popular as River to overtake it in the chart.

That’s because the current rules state that 100 streams on a premium streaming service and 600 streams on an ad-funded service are deemed to equal one unit (or what used to be called a sale), but those ratios double for older songs. Yes, it seems the prosecution against Jeff Bezos can now include blaming him for preventing Last Christmas from finally getting to number one.

Arguably, that past classics have the power to hog the upper reaches of the charts today is madness anyway. Their ability to do so springs from the Official Charts Company’s decision in 2014 to catch up with the reality of the music market and include streaming in the main chart – a move that crucially changed what the chart was measuring from purchase to consumption.

In something of a problem for the music industry, it turned out that what people really liked to consume was the songs they already knew. The impact, most pronounced in nostalgic December, has a year-round effect. Not long after streaming was incorporated into the official chart, the chart slowed down, with fewer releases breaking through and the ones that did hanging around for an absolute aeon.

The once critical gatekeepers who compiled and refreshed radio playlists have forever been accused of pushing a bland, conservative and narrow musical diet on listeners. Perhaps they were actually doing a decent job at moving people along to something new without frightening them away.

Like all charts, music ones have long been feedback loops in which success breeds success. Once it was a non-disastrous spot on Top of the Pops that did this trick for singles. Now there are algorithms to reward popularity, and the new human gatekeepers are those who curate the playlists on streaming services. A high chart spot still confirms legitimacy and guides the next rake of record company contracts. A flop makes everybody think twice.

Goulding’s third UK number one (which duly plummeted the following week) shows that this is no longer simply the age of streaming, but the age of the smart speaker. In theory, this is exciting. It would be sad indeed if, rather than helping music culture evolve at a cracking pace, technology worked to make it boring. After a while, there’s no fun in saying: “Alexa, play me a song I’ve heard before.”