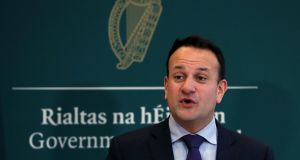 Taoiseach Leo Varadkar has insisted on reaching agreement on property tax reforms with Fianna Fáil leader Micheal Martin before agreeing a date for the forthcoming general election, the Sunday Independent reports in its lead article.

The move puts property tax at the centre of the election debate after the Government last year deferred any changes to the charge until 2021, and is also an attempt to out manoeuvre Mr Martin on a key issue before the vote is called, the report said. Since freezing the property tax, Minister for Finance Paschal Donohoe said he planned to introduce a “modest” property tax increase next year by broadening the housing valuation bands and cutting the rates at which it is paid. However he has been reluctant to give details of how much property owners will pay.

In a letter sent to Mr Martin before Christmas, the Taoiseach suggested he was open to dissolving the Dail after Easter, as suggested by the Fianna Fáil leader, if he agreed to an “ambitious” legislative programme for the coming months. Mr Varadkar said agreeing to reforms of the property tax system should be central to any deal struck between two party leaders, who are epxected to hold talks on an election date in the coming days.

Revenue rakes in more than €100m in sweep of ‘shadow economy’

A Revenue crackdown on retailers, landlords, accountants and others in the “shadow economy” had brought in more than €100 million, the Sunday Business Post reports on its lead page. The latest figures show that the Revenue uncovered more unpaid tax last year in the retail sector than the construction sector, which is recognised internationally as “high risk” for cash-only jobs and bogus sub-contracting. A clampdown on full-time landlords and non-tax registered Airbnb hosts has also seen the rental sector deliver the second highest tax yield during the Revenue’s investigations into the “cash economy”.

The Sunday Business Post also reports that the Central Bank has ruled out conducting a review of mortgage pricing despite political pressure for it to probe interest rates being charged by lenders. Irish mortgage interest rates have remained stubbornly higher than those charged in other EU countries and, according to the latest Central Bank of Ireland (CBI) figures, are the second highest in the euro zone. Furthermore, new and existing mortgage customers are often offered different interest rates by lenders. The regulator had been asked by Sinn Fein finance spokesman Pearse Doherty last November to investigate this practice of differential pricing, but it has declined to do so.

According to the Sunday Times, several of the country’s biggest property groups are gearing up for new developments of thousands of apartments in Dublin and Cork, with virtually all of the proposed properties targeted at the lucrative rental market. In the closing days of 2019, property development groups opened talks with An Bord Pleanala about fast-track approval for projects involving almost 5,000 apartments, far outweighing proposals for new houses. Property sources said an average apartment cost about €350,000 to develop, suggesting investment of €1.75 billion in the projects.