Ban on sale of petrol and diesel cars on the cards

Seen and Heard: €100m expansion for the Square in Tallaght as An Post targets 10% of mortgage market 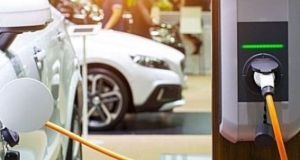 The Independent on Sunday leads with news of a possible ban on the sale of petrol and diesel cars by 2030. Minister for Climate Action Richard Bruton has reportedly instructed officials to prepare legislation enforcing the ban with plans to bring it before Cabinet for approval in the coming weeks.

The new laws are aimed at forcing motorists to switch to electric cars and coincide with plans to introduce more charging points around the State. New construction rules to aid this are planned including a requirement that all new residential buildings with more than 10 parking spaces have at least one charging point.

The same newspaper reports that tech giant Dell has accrued $4.9 billion in tax benefits by transferring intellectual property rights to an Irish subsidiary. The transfer was done on the basis that Ireland is the headquarters for Dell’s international business. A spokesman for the company stressed that it complies with tax laws across all the jurisdictions it operates in.

Irish whiskey veteran John Teeling, the father of Teeling Whiskey founders Jack and Stephen, said the success of Irish whiskey could be a double-edged sword for some of the State’s newest distilleries. Speaking to the Business Post, Mr Teeling, who founded Cooley Distillery – the first of the challenger distilleries – and now owns Great Northern Distillery in Dundalk, warned of “a shake-out” in the sector over the next few years.

The same paper reports that An Post is targeting a 10 per cent share of the mortgage market, although no timeframe is given for when it expects to reach this target. The semi-state company is expected to launch its first mortgage products in the new year.

The Business Post also reports on the case between Ryanair and its former chief operating officer Peter Bellew. It says that Mr Justice Senan Allen in his High Court judgment last week, found that Mr Bellew misled his new employer EasyJet over the non-compete clause in his Ryanair contract.

Mr Justice Allen on Monday last ruled that Mr Bellew can join EasyJet after deciding the clause restraining him for working for another airline for 12 months, was unenforceable.

The US investment fund which acquired the Square shopping centre in Tallaght for €250 million last year is planning a €100 million expansion, according to the Sunday Times. It says that Oaktree Capital Management want to make the centre a “destination” for shoppers and foodies by creating two separate expansions. Work is expected to begin early in the new year.

Elsewhere in the same publication, it is reported that industrial holding company DCC is taking over Tesco’s 22 Irish forecourts, although no terms of the deal have been disclosed. DCC is reportedly doing the deal though Certas Energy, which runs the group’s businesses in the UK and continental Europe.

Separately, the paper says the Premier Inn chain is to build its fifth hotel in Dublin, with a new property in the Liberties area. The chain has reportedly agreed a pre-let deal for an eight-storey hotel close to Newmarket Square. Premier Inn is intent on aggressively expanding in the Republic. It has only one hotel open locally at present but last year announced plans to open more. These include four more in Dublin and one in Cork.