Blood, rugby and two trips to Love Island for Virgin Media Television in 2020 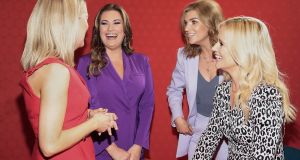 Love Island winner Greg O’Shea will co-present The Late Tackle, a new rugby-themed entertainment show on Virgin Media Television (VMTV) to coincide with its coverage of the Six Nations.

The rugby union player, along with Six O’Clock Show host Muireann O’Connell, will front the Thursday night show to tie in with the third year of VMTV’s four-year deal to broadcast the tournament, its biggest audience magnet.

It will be scheduled after Love Island, the ITV import that also garnered some of the VMTV’s best ratings in 2019 and will return for an extra “winter” season on Sunday with new Irish presenter Laura Whitmore.

The broadcaster, part of Virgin Media Ireland, presented details of its spring line-up to advertising agencies and industry representatives in Dublin on Thursday.

VMTV managing director Pat Kiely said 2019 had been “one of the most challenging years for the media industry”, but that the company grew its advertising revenue in a declining market.

“We cut our cloth, we made tough decisions and we managed our way through.”

The broadcaster had about eight redundancies near the end of the year as part of a programme of cutbacks at its parent company.

Bill Malone, director of content, said VMTV would renew its strategy of targeting the 15- to 44-year-old audience in 2020 with programmes including the second series of Sophie Petzal’s much-exported drama Blood, starring Adrian Dunbar and Gráinne Keenan, which will begin in February.

The Guards: Inside the K, a documentary series depicting the work carried out by An Garda Síochána in Dublin, will be shown from March.

VMTV also showed its first clip of The Deceived, the previously announced new thriller from Derry Girls writer Lisa McGee and Tobias Beer. The series is now in post-production, with a broadcast date yet to be set.

“Once you’ve got a body, you’ve got a great thriller,” said Mr Malone of The Deceived, with stars Emily Reid, Emmett J Scanlan and Ian McElhinney.

Between last September and this April, some €18 million worth of Irish drama will be shown on Virgin screens, but owing to its collaborations with international partners – notably UK production giant All3Media and broadcaster Channel 5 – as well as funding agencies, VMTV has only financed a fraction of this total.

“One of the great joys of my job is getting so much out of what you have,” said Mr Malone.

“We’re in the position now where we are attracting inward investment into the Irish creative sector, which means there is more money on screen and more money in Irish drama, formats and factual. We are doing that with a relatively modest amount.”

At the Mipcom marketplace in Cannes last October, VMTV was for the first time “more of a seller than a buyer”, Mr Malone said.

The event saw distributor Fremantle selling Virgin gangster drama Darklands, All3Media selling Blood, the BBC selling factual formats OAP B&B and the upcoming First Love, and US distributor A&E Networks selling Generation Dating, which it co-commissioned with Virgin and will be shown in Ireland next month.

VMTV also said it had 47 million on-demand streams in 2019, with some 12 million of them for “breakout hit” Love Island, which the commissioning broadcaster ITV is now running twice a year. The Virgin Media Player will be upgraded this year, while a new Virgin Media set-top box is due to be released for the company’s pay-TV customers.

Mr Kiely paid tribute to late RTÉ broadcasters Gay Byrne, Marian Finucane and Larry Gogan, describing them as “pioneers and trailblazers who set the standards that all of us in this industry aspire to follow”.