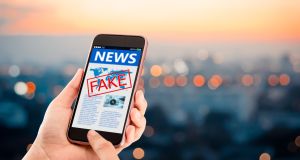 Google, Facebook, Twitter and Microsoft have signed up to an EU Code of Practice on Disinformation meant to increase transparency.

Digital giants including Facebook and Google could face new regulations under the incoming government, according to Broadcasting Authority of Ireland (BAI) chief executive, Michael O’Keeffe.

He made the prediction after a report commissioned by the authority showed these businesses’ efforts to tackle fake news fell short of standards set by an EU code of practice that they have agreed to follow.

Speaking after the report was published yesterday, Mr O’Keeffe noted that outgoing Minister for Communications, Richard Bruton, had already published heads of a bill that would include some regulation of social media.

He noted a lot of work had been done in this are and said the incoming Government could impose new rules on the sector.

“I can see that happening in the first six to 12 months of the new Government’s life,” Mr O’Keffe said.

Google, Facebook, Twitter and Microsoft signed an EU Code of Practice on Disinformation in 2018 meant, among other things, to make it easier for consumers to distinguish between real and fake news and information.

A report for the BAI by the Institute for Future Media and Journalism at Dublin City University, says that while the companies took some steps their approach was mixed and inconsistent over 12 months to November 2019.

Jane Suiter, the institute’s director said on Tuesday that the companies fell short significantly when it came to labelling trustworthy material.

“Our researchers could not identify any news item across any platform that had been labelled as fact-checked with the corresponding verdict on its authenticity,” Ms Suiter said.

She explained that amongst other steps, digital companies are meant to aid consumers by labelling articles that have been fact checked and found to be accurate or false.

“There still too much fake information and it’s still not clear to people what’s good and what’s bad,” Ms Suiter said.

She added that the four companies should also make it clear to customers to that they can go to established news outlets for accurate information.

A Google spokeswoman pointed out the company was a founding partner with the EU on the code of practice.

She said that the company had expanded policies, products and resources to thwart disinformation and other attacks on its systems’ integrity.

“This report recognises this progress while also pointing out that there is more work to do,” she said, adding that Google looked forward to working on this with its institutional partners.

A Twitter spokeswoman said that the social media company had strengthened how it tackled disinformation and promoted media literacy.

She explained that this work included investing in technology to better detect co-ordinated attempts at disinformation.

Google, Facebook, Twitter and Microsoft pledged to scrutinise ad placements, and political and issued-based advertising and aid consumers in distinguishing disinformation from facts when they signed the code.