Screen romances can no longer be sealed with a kiss, so what next for TV and film? 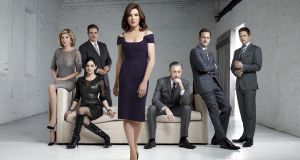 A farewell scene from The Good Wife is being jokily recalled because of the inadvertent template it lends to the new game of filming drama under social distancing guidelines. Photograph: Justin Stephens/CBS Broadcasting Inc

Two women sit at a bar (remember bars?) and exchange short, rueful sentences without eye contact. They have history. As the scene unfolds, the blurry shoulder of one woman is in the foreground while the other’s face is in shot. When they clink glasses, the camera is tight on the tequila. They were friends once, but now they are never both in the same frame.

In fact, they are not in the same room. Their intermediary is a green screen.

Fans of The Good Wife will recognise this notorious non-scene as the farewell one that actor-producer Julianna Margulies “shared” with departing colleague Archie Panjabi, with whom Margulies reportedly preferred to be kept apart for mysterious reasons.

Now this television folklore is being jokily recalled because of the inadvertent template it lends to the new game of filming drama under social distancing guidelines. Need to keep a 2m gap? No problem in a feud.

For almost everybody else, it will be an unwanted hurdle, if not perhaps the biggest one to the viable restart of film and television production. Some dramas are already back on set: the 35-year-old Neighbours, in curve-flattening Australia, is understood to be the first English-language drama to resume filming, with Fremantle Australia’s “creative solutions” hinging on canny editing to make the cast seem closer together than they really are, and – in bad news for certain amorous Ramsay Street stalwarts – the avoidance of scenes that require physical contact.

Now the shutdowns have stopped the cameras rolling, there will be a whole new set of headaches to consider when they start again – if they can start again

Other soap operas, by sheer dint of demand for their product to fill broadcaster schedules, should be among the first to figure out how to adapt their efficient assembly lines to the Covid-19 age once lockdown restrictions in their countries loosen. So too will any production company that’s part of a well-resourced Hollywood machine. But make no mistake, the lingering need for social distancing will be an awkward, expensive hassle for most.

In Ireland, production companies in this space operate within slender margins and already devote more time than they would like to the complex finance bureaucracy required to go into production in the first place. Now the shutdowns have stopped the cameras rolling, there will be a whole new set of headaches to consider when they start again – if they can start again.

A report published last week by Screen Producers Ireland (SPI) counted the cost of the activity that ground to an unceremonious halt in mid-March: at least 24 productions were stood down, while 59 companies reported delays to television programmes or films about to begin shooting.

Casting calls were hastily stood down on Netflix’s Vikings: Valhalla, the Vikings spin-off about to get underway at Co Wicklow’s Ashford Studios, while work on Foundation, the adaptation of the Isaac Asimov books being made for Apple TV+ at Limerick’s Troy Studios, stopped.

The pause button was also pressed on Element Pictures’ The Drowning, a missing person mystery that will eventually air on the UK’s Channel 5 and Virgin Media Ireland, while Irish producers Subotica suffered an interruption to the Dublin filming of Nordic-backed, UK-set spy thriller Redback, and in Belfast, the sixth series of Line of Duty was one of the BBC shows forced to take a break.

Across the industry, the focus has by necessity switched to the page not the screen, with funding agency Screen Ireland reconfiguring its budget so that more money is allocated to the early development stages of projects.

Pretty much the only projects being filmed right now are coronavirus-related television programmes such as VIP’s Operation Transformation: Keeping Well Apart, Indiepics’ Ireland on Call and Macalla Teo’s Home School Hub, all for RTÉ, and this is expected to remain the case until the Government eases the current restrictions.

Doubtless, some producers will already be campaigning to make the Irish equivalent of ITV Studios’ Isolation Stories, an imminent string of mini-dramas made largely inside actors’ households with their spouses or partners operating sanitised equipment delivered to their doorsteps.

Everything that is happening, or not happening, in the screen industry feels like a snapshot of the difficulties swamping so many other sectors

Ingenuity will not be in short supply, though many of SPI’s small and medium-sized enterprise (SME) members may need magic wands to obliterate some of the barriers crowding their path back.

Among the 69 companies that responded to SPI’s call for data, the majority report annual turnover of less than €500,000. Some may not have the cashflow to keep going, others will be running down reserves. Even if – and it’s a big if – the funding tap for projects becomes fully operational, many will then run into an insurance block: SPI believes insurers will attempt to limit any payouts for disruptions to date and will exclude Covid-19 from future policies, leaving companies vulnerable to insurmountable financial distress in the event subsequent pandemic waves cause new chaos.

Everything that is happening, or not happening, in the screen industry feels like a snapshot of the difficulties swamping so many other sectors, with all the pressure points that existed before the crisis now exacerbated by it.

Ironically, the devastation to live entertainment is only swelling natural demand for the filmed variety, even if sometimes it may seem strange to viewers in ways their creators couldn’t have anticipated. When teenagers Connell and Marianne sit on opposite sides of a bedroom in Element’s Normal People, it’s hard not to think, well, they shouldn’t be indoors together given they don’t share a household, but at least if one of them coughs, the other should be okay. But, wait, what’s this, a kiss? Where is this leading? Is this really the time for quite so much intimacy?

You wouldn’t get it on Neighbours.