Is the end nigh for Google and Facebook’s ‘free ride’ on media? 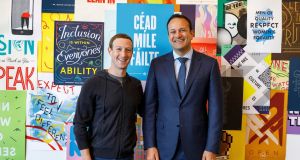 A calamitous plunge in advertising revenues and wave of media cutbacks since the coronavirus economic shutdown has brought the market dominance of Google and Facebook into sharp focus around the world.

Taoiseach Leo Varadkar said he thought the next government would likely consider measures to oblige the tech giants to share advertising revenues “more fairly” with news and other content producers.

“It seems to me to be a very good idea,” he said, referring to Australia announcing earlier this week that it would force the digital advertising “duopoly” of Google and Facebook to pay for content.

Varadkar was careful to describe Google and Facebook as “great companies” that “create a lot of employment” in Ireland, but in going on to define them as “sort of free riders on costs incurred by other people”, he has made a blunt departure from previous diplomacy on this subject.

The Irish media picture, while stark, is not an outlier in the international context. Google and Facebook last year collected an estimated 40 per cent of total advertising spend in the State, according to figures from marketing group Core. The two firms are believed to control more than 80 per cent of the online ad market, effectively stymieing media outlets’ attempts to evolve in the digital age.

Before “the great pause”, online was one of the only categories of advertising expected to grow this year, with print, TV and radio all in line for further decline.

Now, with the wider ad market predicted to contract by as much as 30 per cent for the year, the crisis has exacerbated a situation whereby all media publishers and other platforms must fight harder than ever for what is left of the online scraps.

Dozens of Australian newspapers have stopped printing since coronavirus struck, though the dramatic shift in advertising revenues away from news publishers and broadcasters to tech platforms – unfettered to date by either competition law or media regulation – was already on the agenda there.

The Australian government on Monday said efforts to reach a voluntary agreement had progressed too slowly and its competition watchdog would now draft a mandatory revenue-sharing regime between the US technology companies and Australian media groups.

This upping of the ante followed a rare victory for European news publishers in their battles with the tech giants that have gutted their revenue base. France’s competition regulator recently ruled that Google parent Alphabet must pay French news publishers for using their snippets online.

The verdict of the Autorité de la Concurrence could not have been clearer – Google’s practices have “caused a serious and immediate harm to the press sector” at a time when publishers and news agencies are in a fragile state.

As in Australia, there is still much work to be done before the French industry can tap Google for money: the tech giant has so far only said it will comply with the order “while we review it”. But the French push was made possible by the fact it has transposed into law last year’s European copyright reform. The Government here is yet to do so, and the election and government formation negotiations will have stalled this legislative process.

A simpler approach, though perhaps a less appealing one for an Irish government, would be to introduce a digital services tax similar to the 2 per cent revenue levy on its way in the UK and then allocate the money raised to Irish media outlets and content producers.

Any fightback will more likely than not trigger fierce resistance from Google and Facebook. Past attempts across Europe to get Google to pay for news snippets have seen the company react by simply dropping them, while Australian treasurer Josh Frydenberg has conceded that there is “a big mountain to climb” in its own war.

But Australia is prepared for a fight, Frydenberg says, because there is “so much at stake”.

If the next Irish government wants to preserve both democracy and Irish culture, it will come round to this same view.