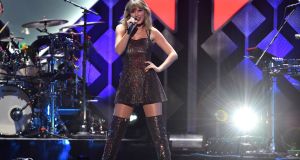 US singer Taylor Swift’s upcoming tour, promoted by Live Nation, was among the shows cancelled due to the Covid-19 pandemic. Photograph: Angela Weiss/AFP

The Public Investment Fund (PIF), the Saudi vehicle steered by Crown Prince Mohammed Bin Salman, has acquired a 5.7 per cent stake in the Los Angeles-based entertainment group, according to a US regulatory filing. Shares in Live Nation climbed 6.7 per cent to $40.78 (€37.66) just before midday in New York, giving it a market value of $8.8 billion (€8.1 billion).

In recent weeks the PIF has snapped up stakes in beleaguered cruise line operator Carnival and European oil companies including Royal Dutch Shell and Total, whose shares have been hit by the collapse in crude prices. It also agreed a £300 million (€344 million) deal to buy a majority stake in English Premier League football club Newcastle United.

Live Nation is among the hardest-hit media companies in the coronavirus crisis, with more than 30,000 events cancelled or postponed across the world.

Shares in the dominant concert promoter have dropped almost 50 per cent since February as its business came to a virtual standstill. Planned blockbuster tours by stars such as Justin Bieber and Taylor Swift have been scrapped, with summer festivals including Bonnaroo postponed after large gatherings were forbidden under coronavirus lockdowns.

Live Nation this month secured a new $120 million (€111 million) credit facility, which chief executive Michael Rapino said would help “weather this difficult time”. The company, which last year made $11.5 billion (€10.6 billion) in revenue and whose largest shareholder is John Malone’s Liberty Media, has warned its sales will drop about 20 per cent in the first quarter of 2020.