Sky shares rally as Comcast and Fox fight over broadcaster 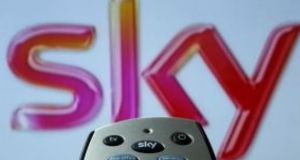 Sky’s shares were up 3 per cent to £15.38 on Thursday as investors bet the battle has further to run

Sky shares leaped to an 18-year high on Thursday as investors bet a transatlantic battle for the European pay-TV group had further to run, after Comcast’s $34 billion bid trumped an offer from Rupert Murdoch just hours earlier.

Comcast, the world’s biggest entertainment group, said on Wednesday it had the backing of Sky’s independent directors for a £14.75-a-share offer that came just 16 hours after Murdoch’s 21st Century Fox bid £14.

The speed with which Comcast’s Brian Roberts counterbid shows how determined he is to buy Britain’s Sky, which broadcasts sports, films and TV shows to 23 million homes across Europe.

Sky’s shares rose to as high as £15.41 pounds on Thursday and were trading at £15.34 in the afternoon session, valuing the company at £26.4 billion as investors bet the bidders would have to pay more to secure victory.

“This thing has gone from £10 to £15 in seconds, so most people have got vertigo on this one,” said Crispin Odey, a top 20 Sky shareholder. “You need a finale at the end of a great bull market, and I think Sky is going to be that finale. It’s got legs.”

The UK government also confirmed on Thursday that it had cleared Rupert Murdoch’s 21st Century Fox to take over Sky. Newly appointed culture secretary Jeremy Wright said he agreed with his predecessor’s final decision to accept Fox’s planned sale of Sky News to Disney should it succeed in buying Sky – a move clearing the final regulatory hurdle for Fox.

In a written statement, Mr Wright said: “The publication of the undertakings marks the final stage of the public-interest consideration of this case.”

He added: “It is now a matter for the Sky shareholders to decide whether to accept 21 Century Fox’s bid.”

The fight is part of a bigger battle being waged in the entertainment industry as the rapid growth of Netflix and Amazon force the world’s traditional media giants to spend tens of billions of dollars to keep pace. – PA